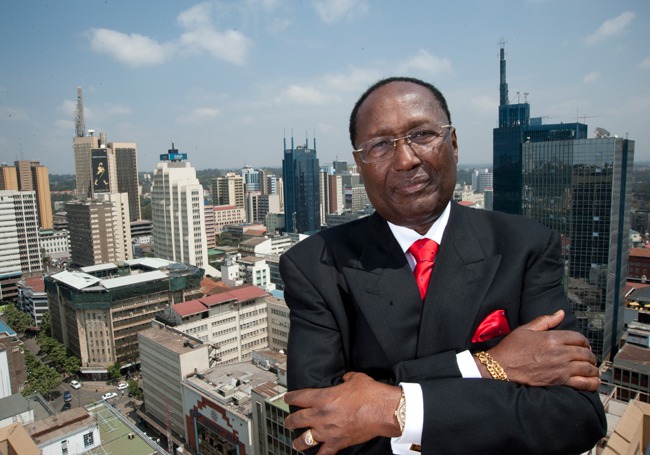 Chris Kirubi, the flamboyant millionaire chairman of Kenya’s Capital Media Group, may be 70 but he shows no sign of slowing down or holding his tongue. The tycoon used the platform at a recent ICT conference in Nairobi to launch a scathing attack on Kenya’s government and ICT Board for not doing enough to connect with young people through digital channels and social media.

“I think we have to stop fooling ourselves that we have changed,” he said. “We need to believe and get the government to do the right thing. The government talks to youth through a newspaper. Why don’t they go to the platform that the youth use? If the government wants to talk to its citizens it should talk to them in their language, in their medium. I think maybe our government is scared of revolution.”

Kirubi put this inactivity down to a lack of faith in Kenya’s young population on the part of the government, and said this had to change.

“I think it’s about time that the government realised that the youth we have can use their brains to generate money,” he said. “The money we have needs to be put into the youth. They can become great inventors. The problem we have is the knowledge gap between the leaders and the youth generation.”

Kirubi’s criticism was all the more pointed as Paul Kukubo, the CEO of the Kenya ICT Board, was sharing a panel with the Capital Media boss at the time the comments were made. Kukubo looked uncomfortable, but upon further pressing from Kirubi was forced to admit that the government was not doing enough in terms of social media, a far cry from the Twitter-active government in nearby Rwanda, though he said the ICT Board was advising the government to do more. He cautioned, however, that the government was an easy punching bag and that the private sector also needed to do more.

This is not just hot air from Kirubi, who has become an active participant on social media platforms. He has 42,438 Twitter followers and tweets prolifically, while also being active on Facebook. Later in life, Kirubi has taken up the baton for young people in Kenya, mentoring them online and fighting their corner in public. The multi-millionaire, who made his money in real estate and now owns companies across various sectors, took to Twitter earlier this year to declare his new objectives.

“I am on a mission. I believe my following needs to grow. I need to be able to work with many Kenyans in order to drive this country forward,” he tweeted. Shortly after, he followed up with: “Oh my word! Thank you all for your support. It’s about time I created more time to mentor and influence the great minds of this country.”

Since then Kirubi has been easily contactable via social media, mentoring and answering questions from various followers. His social media posts normally contain plenty of business insight and advice, such as: “True leadership is about humility. It’s about knowing when to call it a day and acknowledging there others better suited to take the lead” and “To prosper soundly in business, you must satisfy not only your customers, but you must lay yourself out to satisfy also the men who make your product and the men who sell it. So if you’re not doing too well in business, you should consider the above.”

Kirubi is filling a role that, according to a 2004 study by the Harvard Business Review, is crucial. The report said that “young leaders with mentors were more likely to succeed professionally and experience career satisfaction”, noting that a trusting relationship is essential for effective mentoring. Kirubi appears to have created this type of relationship with his many followers, and it is his hope that the Kenyan government will try harder to engage in the same way.