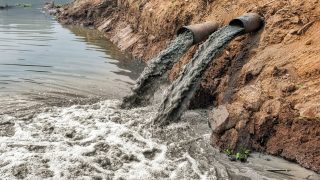 Four companies operating in Nairobi’s Industrial Area have been closed down by Kenya’s environmental agency over allegations of pollution. The affected companies have been accused of releasing dangerous waste into the capital city’s river.

Speaking on the paper recycling firm, NEMA Director-General, Mamo B. Mamo, said Kamongo Company lacks an efficient wastewater treatment plant. The firm has been “discharging into the environment without treating their wastewater to the public sewer,” Mamo stated.

The East African reports that NEMA raided the companies following an expose by Nation on pollution of Nairobi River. The media organization in an investigative report titled Toxic Flow revealed that the Nairobi River is suffocating with a cocktail of raw, untreated sewage from everywhere, including some lavish estates in the capital Nairobi.

Furthermore, the two-month investigation shows that over 4,000 slum dwellers have encroached on the path of the river and exploit its water for domestic and pollution-heavy commercial purposes, transforming the stream into a large open sewer. The river is a dumpsite for dozens of industries, which haul into it fresh pollutants every day, the report says.

The national environment management agency is expected to continue with the inspection of high-risk facilities in (the) Industrial area. “As precautionary measures, we will be closing down facilities that do not meet the set effluent standards,” Mamo said.

In another similar development, partial East African neighbour South Sudan is planning an assessment of the damage caused by pollution in oil-producing areas. The environmental audit, which is expected to kick off in two weeks, will be carried out by a team of environmental experts, Petroleum Minister Daniel Awow revealed at a press conference in Juba at the weekend.

The team will inspect the extent to which oil spillage has destroyed lives and the environment (particularly in the Upper Nile oil-rich region), the minister said, adding that the exercise will be done by an international company to give the government “leeway to correct some of the damage that has occurred.”

Reports say that lobby groups have reported widespread environmental pollution in oil-producing areas in South Sudan, with animals and people most affected. The Juba government has often been criticized over its failure to address pollution in the northern parts of the country.

According to estimates, over 500,000 people have been displaced in oil-producing states as a result of environmental pollution since the beginning of oil exploration in South Sudan in the 1990s. The pollution has also led to an increase in the number of deformed babies and stillbirths, caused by the dangerous heavy metals used in oil production which is suspected to leak into water sources.

Considering pollution is of significant and increasing concern for the continent, the move by both African countries is commendable. However, as stated in a working paper by the OECD Development Centre, the human and economic costs of pollution might explode without bold policy changes in Africa’s urbanization policies.

Moreover, as no blueprint exists for the trade-offs the continent’s policy-makers face, striving to balance human and economic development objectives, they will have to innovate to achieve the needed balance.