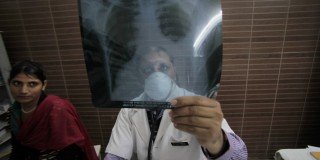 At the launch, a new oral regime was introduced which puts an end to injections. This is meant to be effective for 18 months and cater to patients with drug-resistant tuberculosis (DR-TB).

According to Health Chief Administrative Secretary, Rashid Aman, the new regimen is more effective than the daily shots and drugs previously used.

The rollout of injectable free regimens for the treatment of DR-TB is in line with the World Health Organization’s (WHO) recently released DR-TB Treatment Guidelines.

Part of the WHO guideline states that the global community should move from current regimens to injectable-free regimens to improve treatment outcomes for DR-TB patients.

Since 2006, patients with DR-TB in Kenya have been treated using a regimen. The regimen requires longer treatment periods and has more side effects such as hearing loss.

Injection administered regimens have more side effects compared with the drugs used to treat drug-sensitive TB. Due to the side effects, patients drop out of completing the regimen.

However, the health ministry has stated that the new regimen will be administered only to new patients, who will be able to get three months’ supply of drugs at a go.

For those currently undergoing treatment under the old regimen, they  will have to complete the course before being given the new drug.

Dr Aman has  assured Kenyans that the drugs will be accessible and affordable, adding that people with TB deserve access to the best, simplest and least-toxic treatment regimens.

Also speaking at the launch, Mr Gerald Macharia ,the Country director for the Clinton Health Access Initiative (CHAI), said that the oral drugs will reduce the drug-related side effects while improving adherence to treatment, and eventually the treatment outcomes.

Adding that CHAI is working with the Ministry of Health to reduce the treatment cost of latent TB from Sh4 500 to Sh1,500 per Z1.

According to a Kenya 2014 drug resistance survey, Kenya is among the top 30 counties with TB burdens, multidrug resistant TB and HIV-related TB.

Tuberculosis is caused by bacteria that’s spread from person to person through the air. It is among the world’s top infectious diseases, killing 4,000 people each day, and nearly 1.5 million each year.

Although TB is preventable and curable, it affects more than 169,000 people in Kenya each year and is the fourth leading cause of death, killing nearly 29,000 people annually.

WHO ranks Kenya among the world’s 30 high burden TB countries, with TB being the leading cause of death among infectious diseases in the country.