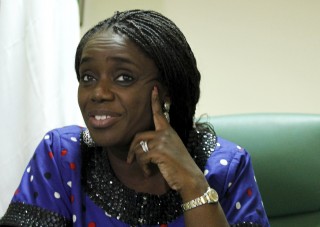 At a press briefing on Saturday, February 20, 2016, the Nigerian Minister for Finance, Kemi Adeosun, made an error in arithmetic. While giving a report on the findings of auditors on various boards in the country, she accused an examination body in Nigeria of fraudulent activities. In her speech, while attempting to give her audience an idea of what was being mismanaged by the anonymous body, she added 6 billion to N16 billion and said the total was N24 billion.

Not people known to be particularly forgiving of mistakes, no matter how little, Nigerians took to Twitter to fault the minister for her inability to solve simple math. #kemiAdeosun and #KemiAdeosunCanNotDoSimpleMaths started trending as Nigerians took turns at poking her mistake.

In the classic Nigerian way, some people are very quick to ignore the more significant point of corruption and fraud while paying attention to superficialities.

I’ve always said Kemi Adeosun’s appointment was a product of nepotism, forgive me if this gaffe reinforces my fears for her capability.

Some others were at hand to call those chiding the finance minister to order:

Are people really judging Kemi Adeosun based on a mathematical miscalculation?

Kemi Adeosun made a very valid point about N22 Billion corruption at an agency, yet some willfully ignore that and focus on inanities. Why?

In her speech, Adeosun stated that the agency budgeted N6 billion in expenses, which means that their capital, overhead costs including salaries, have been taken care of by the government. However, this examination body generated N16 billion as profit (from scratch cards and other sundry items), but only declared a surplus of 3 million. According to her, the agencies could not give an account of what the N16 billion was used for. That is a clear cut case of fraud.

There are just 3 major examination bodies in Nigeria, the JAMB (Joint Admissions Matriculation Board), WAEC (West African Examination Council) and NECO (National Examination Council). While the minister’s error is unfortunate, Nigerians should use Twitter as a tool to push for accountability from these boards.

The registrar of WAEC, Dr. Iyi Uwadiae, has put out a statement to defend the examination body saying “It’s not enough to go to the Senate and reel out figures. The minister should know, that what Nigerian students pay to sit for WAEC examinations is simply an operational/management cost, that covers registration, data keeping and management, printing of examination papers, logistics, marking of scripts and production of certificates. And all of these features cost about N16 billion Naira. The WAEC examination is not designed as a revenue generating source for the Federal Government. In fact governments in the past subsidized the examination fees, just to encourage education. The N6 billion she talked about is for payment of salaries and overhead for staff of the council.”

Uwadiae went further to offer Adeosun another chance to retake her maths examination saying “we do not know the mathematical formula the Honourable Minister used, when she said the summation of N16 billion Naira and N6 billion Naira was N24 billion Naira. I think somebody needs to resit her WAEC mathematics examination. And we in WAEC have offered to give her a free WAEC form in this respect.” Looking closer, one would realise that there is an obvious contradiction between WAEC’s statements and Adeosun’s.  This is where Nigerians have to play the role of censors who would critically analyze the differences and call the corrupt party out.

WAEC is not entirely innocent of corruption. Recently, a letter was drafted to the examination body asking for the names of the best student in the May/June examination, in order to reward the students. WAEC responded by asking for over a million Naira as ‘cost of processing’. The governing council of the examination body is yet to give a response, however it shows that there are more important issues for Nigerians to deal with than a simple mathematical error.

The letter to WAEC and WAEC’s response:

@Omojuwa kindly help to retweet this till it gets to the authorities for investigation. Thanks. Good morning. #Waec pic.twitter.com/TxFWF4CeVF