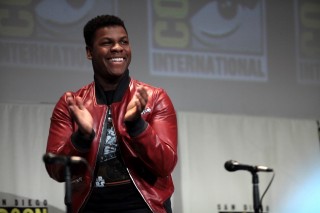 Star Wars Episode VII: The Force Awakens opened to positive reviews from both critics and fans on December 16 in France and Scandinavia, and the film opens in Canada and the U.S later today. The movie is set to prove financial analysts right with expectations that it will be one of the highest grossing movies of all time. The movie was one of the most anticipated movies for this year, following a decade long wait.

The cast of the latest installment of the Star Wars franchise includes Hollywood big shots such as Harrison Ford, Mark Hamill and Carrie Fisher, among other notable actors such as Academy Award-winning Lupita Nyong’o, but the name on everyone’s lips is rising star, John Boyega, who plays AWOL First Order Stormtrooper, Finn.

Initially, John Boyega’s role in the movie came under social media fire before its release. Tweeters vowed to boycott the movie because the makers of Star Wars chose a black person to play Finn. Boyega responded to the issue by asking those ‘concerned’ to “get used to it” on his Instagram page. He further added in a New York Times interview that he was a “confident, Nigerian, black, chocolate, man.”

Boyega is proud of his heritage and upbringing, and isn’t losing any sleep because of people’s racism.

The actor was born to Nigerian parents, Samson and Abigail, in Peckham, London, in a  neighbourhood notorious for being rough. Samson originally planned for his son to follow in his footsteps as a preacher in a Pentecostal church. According to the 23-year-old, his parents’ Nigerian culture naturally makes them uninterested in science fiction and things that aren’t ‘real’.

That notwithstanding, Boyega’s talent and success as an actor have earned him immense support from his family, as well as friends. His impression of his father’s reaction and Nigerian accent when he found out he landed a part in the blockbuster is still making the rounds on social media.

While Boyega is probably more excited about his part in Star Wars than some of the movie’s fans, he has Isaac in the British sci-fi cult film Attack the Block to thank for the opportunity to land his current role.

Star Wars: The Force Awakens has made over $100 million in pre-sales of tickets alone. Its final box-office fate will be decided by the end of tomorrow, December 18.