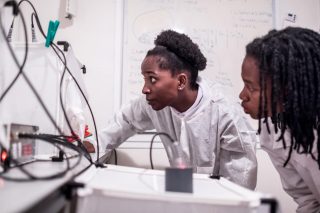 JFD opens submission for the Margaret and Margaret Junior 2022 awards

JFD, an initiative to increase the share of women in the digital sector in Africa, has opened submissions for the Margaret and Margaret Junior 2022 awards until 17 January 2022. Les Margaret Award is open to women founders or co-founders of tech startups in the entrepreneur category. And to women employees who have developed an innovative project in agreement with their employer while remaining employed in the intrapreneur category.

They must be citizens of an African country and have a digital project that responds to one or more societal issues in the following sectors: environment and energy (climate change, urban planning, energy transition, sustainable development); health (access to care, diagnosis, treatment); ICT (cybersecurity, IoT, data science, digital everything), and transport and mobility (vehicles, infrastructure, uses).

The winners will benefit from media exposure valued at one million euros for a year, speaking opportunities at major international events, digital equipment, and will participate in coaching/mentoring sessions with JFD partners.

Under the patronage of Jean-Michel Blanquer, France’s Minister of National Education, Youth, and Sport, the Les Margaret Junior Award is open to young African girls aged seven to 18. Kidpreneurs, teenpreneurs, and tech creatives are all eligible. Those with an idea, a concept, or startup project that uses technology to address a problem in health, education, the environment, or mobility, or those who have developed a prototype – robot, game, application – using one or more technologies – artificial intelligence, 3D, IoT.

Since its inception, JFD has honoured and connected women in the African and European digital sectors. It has obtained the voluntary support of personalities, leaders and entrepreneurs such as Louise Mushikiwabo, Edith Brou, Afua Osei, Vanessa Moungar, Soham EL Wardini, Yacine Barro, Florent Youzan, Oulimata Sarr, and Brigitte Macron to highlight these issues of parity and inclusion.

The year 2022 marks the 10th anniversary of the initiative, and the award ceremony, under the patronage of the President of the French Republic, will take place on the 8th of March 2022. The deadline for submissions ends on the 17th of January 2022.