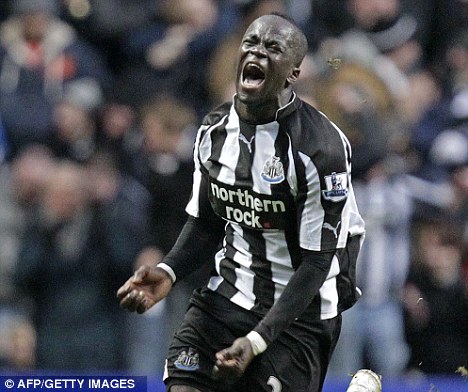 Despite being stretched off needing seven stitches on a head wound and holding up play for about eight minutes, Ivorian and Newcastle United midfielder, Cheick Tiote, says he wanted to continue playing on Wednesday night.

Tiote was involved in a collision with Chelsea and Nigerian Midfielder John Mikel Obi and lay on the ground receiving treatment for about eight minutes but the Ivorian insisted, “I wanted to play on.”

Speaking on his club’s website nufc.co.uk after Newcastle’s 2 : 0 away win over Chelsea, the Ivorian noted, “I wanted to play on but the doctor said it’s not possible to come back onto the pitch so I had to respect his decision.”

However, Tiote has allayed fears he will be out for a lengthy period insisting he will be back to action this weekend.

“When I was down, my eyes were groggy and I couldn’t see properly but now I’m okay and I will be fit for Sunday.”

As the tough tackling midfielder lay on the ground with players from both sides crowded around, it evoked memories of Fabrice Muamba at White Hart Lane just a month ago. But unlike Muamba, Tiote did not need to be rushed to hospital. He still had time to worry about his team’s performance against Chelsea at Stamford Bridge.

“I wasn’t worried that we’d hold on because after that we stayed focused and played well. Then Papiss scored his second goal for a great result.”

And speaking about his stunner that sealed the win for the Magpies, Senegalese striker, Papiss Cisse, said: “I just saw the ball coming back from Shola (Ameobi) and I just wanted to shoot as I had no power, so I just shot.”

Newcastle’s win edged them closer to a Champions League spot with two games left. They are 5th on the table tied on 65 points with 4th placed Tottenham Hotspurs but just behind on goal difference.