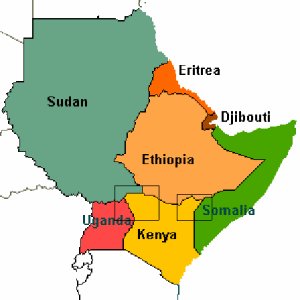 Africa has had its fair share of crisis, but its current developmental strides are shifting focus from the continent’s troubles to the abundant potentials and opportunities. These positive changes have been reinforced by continuing regional integration in the Eastern, Southern and Western parts of the continent. However, the countries in the Horn of Africa are still held back by age old skirmishes, which are still barriers to socio-economic cooperation. This lack of transnational partnership continues to hamper the growth and development of these countries, which have among them states languishing at the bottom of international societal indexes.

In a recent High Level Joint Commission Meeting of neighbours Ethiopia and Djibouti held in early February, the leaders of the two countries underscored the significance of enhancing bilateral cooperation in the political, economic and social sectors. Djibouti’s Prime Minister Ismail Omar Guelleh and his Ethiopian counterpart HailemariamDessalegn reiterated their commitment and determination to consolidate the existing strategic relations between the two countries and peoples in all fields of cooperation.

Landlocked Ethiopia is a major economic partner of Djibouti and Sudan and is reliant on both countries’ ports for imports and exports. About 85 percent of the country’s yearly oil consumption comes from Sudan via the Port of Djibouti. A protocol concerning Ethiopian access to Port Sudan was signed between the two countries in 2000 in Khartoum. They are now in the process of linking their power grids. Ethiopia has also improved relations with Somalia, a country bordered by the Indian Ocean to the east. Although Somalia is just recovering from years of civil war and insurgency by Islamist extremists, Ethiopia and its ally, Djibouti have expressed commitment to helping Mogadishu cement the peace bulding process. In contrast, Ethiopia’s dealings with its northern neighbour Eritrea are extremely tense due to an ongoing border dispute between the two countries. After the end of a 30-year war in 1991, the two countries still have not found common ground. While Ethiopia has flourished and has become one of the fastest growing economies in Africa, Eritrea’s economic fortunes have not improved. Now, Ethiopia’s fears are not about another war, but the effect that chaos in Eritrea may have on its growing economy.

Eritrea’s change may be tied to a new leader

Eritrea’s stance on issues, and the way the international community views the poverty-stricken nation, may only change with a change in leadership. In a joint communiqué released by both Guelleh and Dessalegn after the  meetings held from February 2 through 9, they condemned they perceive as a policy of continuous and deliberate destabilization pushed by Eritrean Government led by IsaiasAfwerki. They pushed for the international community to strengthen sanctions against the Eritrean state instituted because of its support for Somalia based rebel groups. Djibouti and Ethiopia’s leaders say they seek sanctions to put further pressure Eretria’s leader who has shown no signs of readiness to make changes. However, a refugee crisis, high-level defections, and recently, mutiny in the army indicate that Afwerki’s regime faces serious threats and may fall sooner rather than later.

Just as the process of change began for Ethiopia after long-time strongman, MelesZenawi, died in 2012, Afwerki’s ouster may signal the beginning of change for Eritrea.  While everyone affected by the tension between Ethiopia and Eritrea craves peace, there are many thorny issues the two nations need to sort out. One important area of disupte is the contested border town of Bademe. The town was awarded to Eritrea by the Ethiopia-Eritrea Border Commission (EEBC) though Ethiopia has not relinquished control. Ethiopia may have to let go for the sake of peace. This will exert more pressure on Afwerki who uses the perceived Ethiopian threat to justify his system of one-man rule and compulsory military conscription.

Djibouti is Ethiopia, Ethiopia is Djibouti

Apart from having a common enemy in Eritrea, Djibouti and Ethiopia have always had good relations. There have been reports of genetic linkage between the two countries, which have led to a proposal for unification of the nations. Prime Minister Ghelle last May said there was no difference between them: “We believe that Ethiopia is Djibouti and Djibouti is Ethiopia, no difference at all.” According to the Ethiopian Reporter, Djibouti proposed a unification with Ethiopia, which the latter is likely to embrace. However, the people and the governments of the two countries should be the ones to decide what kind of integration they would like to forge. The Horn of Africa could form an important economic quartet if relations with Eritrea improve. The East African Community is arguably the most important economic bloc in Africa, and its integration has fostered the economic growth of member states. Such success can be replicated in the Horn of Africa, but this requires vision, commitment, will, and most importantly, that Ethiopia settles its scores with Eritrea. Ethiopia and Djibouti may not be enthusiastic about having a larger economic bloc in the Horn of Africa, but both countries have recommitted to the decision of the Inter-Governmental Authority on Development (IGAD) Assembly of Heads of State and Government to revitalize the eight-country trade bloc, to speed up the regional integration process. It remains to be seen whether countries in the EAC, who are comfortably building Africa’s largest economic bloc would be ready for an extra commitment with IGAD.