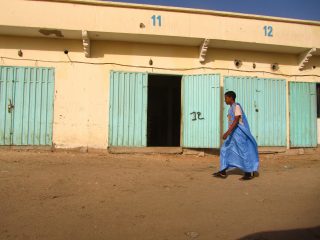 It’s been over 40 years since Mauritania abolished slavery, but that abolishment happens to be only on paper; slaves are still bought, sold and given away as gifts. Worse still, voices who dare speak against slavery and discrimination are silenced by the Mauritanian government. According to a recent report by Amnesty International, there is a growing repression against human rights activists and defenders who speak out against the persistent practice of slavery.

The Islamic country has one of the highest rates of slavery in the world; late last year, it was estimated that about 400,000 people were living in slavery in Mauritania, which is about one percent of its over four million population. Activists and groups are constantly under scrutiny by the authorities and “face arbitrary arrest, torture, detention in remote prisons and the systematic banning of their gatherings”, AI reports.

The organization has documented 168 cases in which human rights defenders have been arbitrarily arrested, including at least 17 cases where they were subjected to torture and other ill-treatment. In 2014, the government imprisoned opposition leader Biram Dah Abeid for protesting the repeal of a man’s conviction for raping his teenage slave. Dah Abeid was in jail for two years.

“The repression is getting worse and worse. You have to have courage to work on slavery because it’s not easy”, Boubacar Messaoud, president of SOS Esclaves, one of Mauritania’s oldest anti-slavery groups, told Reuters.

Protests are also banned and reported cases of exploitation are snubbed by the authorities and judiciary as they intentionally fail to identify victims and punish perpetrators. In 2016, only two individuals were sentenced by the country’s anti-slavery courts despite them receiving 47 cases involving 53 suspects for investigation. Peaceful gatherings are often dispersed forcefully and violently, resulting in serious injuries on the oppressed; 20 human rights groups have testified to AI on this.

“It is a disgraceful disregard for human rights that despite abolishing slavery in law nearly 40 years ago, the Mauritanian authorities continue not only to tolerate this practice but to repress those who speak out against it.” – Alioune Tine, Amnesty International West and Central Africa Director.

In the West African country, slavery and discriminatory practices are mostly targeted at the dark-skinned Haratines and Afro-Mauritanians by the light-skinned Arab-Berbers. “This includes severe under-representation in leadership positions and obstacles to registration which among others limit their access to essential services”, AI reports.

However, the Mauritanian government has denied some of these reports through its spokesperson, Mohamed Lemine Ould Cheikh. Ould Cheikh told Reuters only unlawful and unregistered organizations that provoke riots, chaos and insecurity are brought to justice. “The human rights organizations operating in accordance with Mauritanian law exercise their activities freely”, he said.

As the country prepares for forthcoming elections this year and next, human rights groups, activists, and organizations like Amnesty International are concerned about the high risk of social unrest that will unfold if critical voices continue to be silenced by the authorities.