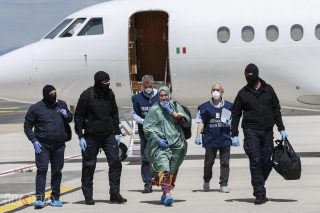 Italian hostage abducted in Kenya returns home after a year

Silvia Romano, an Italian aid volunteer who was kidnapped in East Africa 18 months ago arrived in Rome on Sunday, May 10, 2020, a day after being freed, according to officials in Italy.

Although the terms of her release were not publicized as the Terrorism Act (2000) makes payments to terrorists illegal, Italian Prime Minister Giuseppe Conte, however, announced in a tweet on Saturday that the 25-year-old has been released. “Silvia Romano has been freed! I thank the women and men of the external intelligence services,” Conte disclosed.

The Italian news agency (ANSA) reported that Romano was rescued by the Italian foreign intelligence service, in collaboration with Turkish and Somali officers at a location 30km (19 miles) from Mogadishu, Somalia’s capital. Escorted by masked men from the intelligence service, Romano wore a green tunic pulled up to cover her head but not her face. ANSA citing investigative sources, reported that she had converted to Islam during her time in captivity.

Corriere Della Sera posted a video on its website wherein Romano asserted “I am well, luckily, both physically and mentally. I now want to spend time with my family.” On her arrival, Romano went on to add “I am so happy to be back after all this time.”

In a report by VOA, Somali security is of the impression that Romano was kidnapped by al-Shabab militants who previously abducted foreigners and aid workers demanding ransom from the government. The abduction of two Spanish aid employees working for Doctors Without Borders in October 2011 was one of the reasons the Kenya government gave for its military intervention into Somalia that year.

Al-Shabab, which is behind many attacks in Somalia and neighbouring Kenya, is known for using kidnappings to raise money and as a protective shield to prevent security forces from striking. According to the British-based company AKE, ransoms in Somalia have averaged between $250,000 and $600,000.

The Islamist militant group has been known to abduct foreigners engaged in tourism, humanitarian aid work, journalism or in the business sector. Currently, 3 Iranian sailors, 2 Cuban doctors, 2 Kenyans and a German nurse working for the ICRC are being held in areas controlled by al-Shabab.

Nevertheless, the Somali government together with the United States and other international forces have joined efforts to disrupt the operations of al-Shabab through combats and airs trikes.