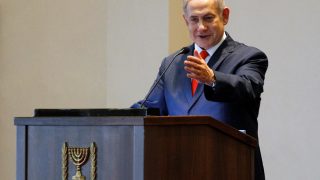 On Monday the 3rd of February, Israeli Prime Minister, Benjamin Netanyahu and head of Sudan’s sovereign council Abdel Fattah al-Burhan, met in Uganda to strategize on normalizing diplomatic relations between the two countries. The meeting was arranged by the United Arab Emirates and consisted of a small circle of top officials in Sudan, including Saudi Arabia and Egypt.

This can be seen as a  step towards building a relationship between the two countries, which were once sworn enemies and still technically at war. Sudan which is a Muslim-Arab country in northeastern Africa is believed to have recently moved away from Iran’s influence over the latter’s involvement in Yemen, and ousted al-Bashir a year ago.

However, Palestine is opposed to the peace talks between Israel and Sudan and considered it “a stab in the back for the Palestine people.”  According to a statement made by Saeb Erekat, secretary-general of the Palestine Liberation Organization (PLO), this was also a “stark departure from the Arab peace initiative at a time when the administration of [US] President Donald Trump and Israeli Prime Minister Netanyahu are trying to liquidate the Palestinian cause.”

The Palestinian Islamic Jihad called on the “Sudanese people, their civil movements and their free revolutionaries to oppose any attempt to damage Sudan’s respected position”.

The war between Israel and Sudan dates back to as far as 1967 when Sudan hosted the Arab League summit, in which it established the “three no’s” which signifies No to peace with Israel, No to the recognition of Israel, and No to negotiations with Israel.

In 2009 under al-Bashir reign, Sudan was believed to have served as an avenue in supplying weapons for Iran to Palestinian terrorists in the Gaza Strip. Also, Israel was believed to have been behind airstrikes in Sudan that destroyed a convoy in 2009 and a weapons factory in 2012, resulting in conflict between the two regions.

If the diplomatic relations between both countries are restored, this could help quicken the process of removing Sudan from the US terror list. Sudan is desperate to lift sanctions as it is listed by the US as a state sponsor of terror. It could also be seen as a vital step towards ending its isolation from foreign aid and investment while contributing to the restoration of its failing economy.

For Israel, this could be a major diplomatic breakthrough between Arab and African countries, two days after the Arab League rejected a US peace initiative seen as heavily favouring the Jewish state.  The Israeli prime minister made expanding ties in Africa a central part of his foreign policy. He started in 2019 by forging ties with Chad and is in the process of doing the same with Uganda.

Netanyahu also met with the Ugandan government, saying Israel is “returning to Africa in a big way.” In a news conference, Netanyahu said Israel would open an embassy in Kampala, the Ugandan capital if Museveni established one in Jerusalem. The Ugandan leader responded by saying his government was “studying” the matter.