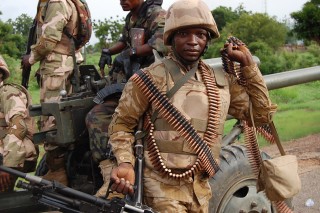 Is this the beginning to an end of insurgency in Nigeria, or yet another sham?

“If they are interested in peace, how can they kill 13,000 Nigerians?” That was President Buhari’s stance on dialogue with Boko Haram in an interview with BBC in February 2015. Fast forward five months; “If we are convinced that the (Boko Haram) leadership… can deliver those girls we would be prepared to negotiate what they want,” President Buhari tells CNN’s Christiane Amanpour.

Now the sect has called for a dialogue with the Nigerian government, a move some Nigerians consider a trap or sham. On Tuesday, 04 August 2015, Air Commodore Yusuf Anas (rtd), the Executive Secretary of the Centre for Crisis Communication CCC, asserted the group’s willingness to negotiate with the government. According to him, members of the group have made contact with the CCC to initiate dialogue with the federal government on their behalf.

Commodore Anas did say that the CCC have taken measures to ascertain the genuineness of the persons who reached out to the centre, but what Nigerians are not convinced of, is the identity of these individuals asking for a dialogue. “For all I care these mofos may not actually be Boko Haram members. They may be some hungry impostors from Niger or Chad trying to get their share of our country’s Amnesty program,” commented a reader on a popular Nigerian blog, in response to the news.

“They should tell that to the dogs. They are definitely going to dialogue with the wrong people and get robbed of billions at the end of the day,” said another reader. “Federal government should watch it,” he warned.

The scepticism of these Nigerians is understandable; this is not the first time a Nigerian government claimed dialogue with Boko Haram, there have been instances of fraudulent deals with the group in the past. The past administration of President Goodluck Jonathan made claims to have had dialogues with the group to reach a ceasefire conclusion, only to have them attack two villages in Borno hours after the supposedly sealed deal.

“We believe they are ready for genuine dialogue. However, discussions are still ongoing and nothing concrete has been arrived at, but it is an opportunity to interact with what I call insiders in the Boko Haram group,” said secretary Anas. But in awareness of previous fruitless negotiations, he stated that, the Centre calls for caution, “… such dialogue should be done with every sense of caution and responsibility bearing in mind the previous disappointments of attended attempts at negotiations.”

If this assertion is true however, Nigerians have diverse reactions to it.

@RC1023FM#ContinentalSunrise if Boko Haram wants dialogue, they should do a video that they normally do and state it there.