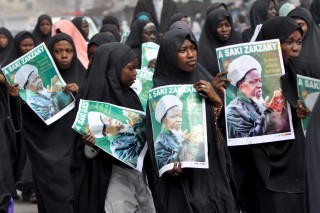 Is Nigeria’s Crackdown on the Shiites a proxy war between Iran and Saudi Arabia?

According to the Human Right Watch, between Saturday, December 12 and Monday, December 14, 2015, at least 300 Shiite sect members were killed by Nigerian soldiers in Zaria, a city in the northern part of Kaduna state.

On December 12, the army released a statement on their website (the page has since been taken down) explaining the entire incident. In the statement, an army spokesperson, Colonel Sani Usman, said that the Shiites put up a makeshift roadblock and then attacked the army convoy with dangerous weapons in an attempt to kill the Chief of Army Staff, Lieutenant General Usman Buratai. The statement also said that the Shiites were following orders from their leader, El-Zakzaky, who was later arrested on December 12 and has not been tried till date. Scores of Shias were shot dead but the army did not record any casualty.

The violence spilled over into 2016 as we have witnessed more extrajudicial killings of Shiites, destruction of Shiite-owned properties by “mobs”, a standoff with the military, and the ban on the Shiite movement in Kaduna, Kano, and some other northern states.

The Shia Muslims make up 12 percent of Nigeria’s entire Muslim population, according to the Pew Research Centre. They are led by Ibrahim Al-Zakzaky, who is also a leader of the Islamic Movement in Nigeria. Also, the Shia movement is said to be funded by the Iranian government, according to the Nigerian Army. Sunni Muslims, on the other hand, make up 38 percent of Nigeria’s Muslim population and is by far the predominant Islamic sect in Nigeria.

The rise of the Sunni Muslims can be attributed to two Salafist scholars: Abubakar Gumi, a senior judge and preacher in Nigeria who spearheaded a pro-Salafist (Izala) movement, and Jafar Mahmud, a graduate of the Islamic University of Medina, located in Saudi Arabia.

A New York Times analysis of Saudi Foreign Ministry explained the relationship with Saudi Arabia and Iran as an obsession and a proof that Saudi Arabia sees the Iran as a threat that must be controlled. The report says Saudi has a “near obsession with Iran, with diplomats in Africa, Asia and Europe monitoring Iranian activities in minute detail and top government agencies plotting moves to limit the spread of Shiite Islam.”

The struggle for regional influence between Iran and Saudi Arabia dates as far back as 35 years ago. Saudi Arabia has consciously fought the spread of Shiite Islam and has supported rebel groups in toppling Shia held governments.

Countries in the Middle East where Shiites are a majority were once ruled by Sunnis, who did not dare to play with the possibility of a Shia government. But this changed over 35 years, starting with the Islamic Revolution in Iran that produced an aggressively Islamist Shia government. Then came America’s invasion of Iraq which led to a transferred governance from Saddam Hussein (a Sunni-led government) to a Shia-concentrated government. With the way these events played out, the Middle East experienced a change of political power from the Sunnis to the long-oppressed Shias who are only 10-15 percent of the Muslim population.

In 2004, King Abdulla of Jordan expressed his fear of a Shia crescent spreading from the Middle East. He feared that the Middle East will become a territory highly influenced by Iran, and he wasn’t alone. Proxy wars aided by the Saudi Arabia to stop the spread of Shia Islam and Iran’s hold in the Middle East have been countered by Iran’s funding of Shia rebels to fight back against suppression in Bahrain, Syria, Afghanistan, Pakistan and Yemen.

What is Nigeria’s place in all this?

Earlier this year, President Buhari confirmed the membership of Nigeria in the Islamic Coalition against terrorism formed last year by Islamic countries following the order of Saudi Arabia. Iran was left out of the coalition. On the surface, this is could be called a laudable move. But when we look deeper, we will find how questionable a move it is. One important fact is that Nigeria is not an Islamic state and this move could lead some to conclude that Nigeria has passively picked sides.

The question is, why should Nigeria be dragged into a proxy war between the two Middle Eastern powers that have somehow kept this conflict out of their lands, and have turned other countries into proxy battlefields for political supremacy? Both Iran and Saudi Arabia have unabashedly supported rebels in Bahrain, Syria, and Yemen to stop the spread of Wahhabism (a branch of Sunni Islam) and Shiism respectively, at the detriment of unsuspecting civilians who are used as bait in a quest for supremacy.

Earlier this year, Saudi Arabia executed 47 people, including a Shia cleric, on grounds of terrorism. This sparked a protest in Tehran and resulted in the burning of the Saudi embassy located there. It also put a final nail on the relationship between Iran and Saudi. The trend from these two countries is to fund the oppressed to suppress the oppressor (Iran) and fund the oppressors to keep on suppressing the oppressed (Saudi Arabia).

If the crackdown on the Shias has not been politicised, it may already be on its way. History isn’t solely there for lessons; it’s there to be referenced when it inevitably repeats itself.