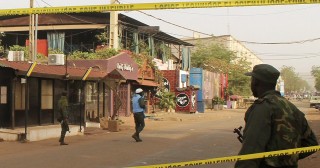 Is Mali paying the price for its close ties with France?

The whole world is now abuzz with news of gunmen who have taken about 170 people hostage in the Radisson Blu hotel in Mali this morning. At least eighty hostages have reportedly been set free while three people have been confirmed dead. This attack occurs barely a week after terror attacks in Paris killed 129 people and two days after terrorists bombed two Nigerian cities.

Like many other former French colonies, Mali still maintains close ties with France. French troops arrived Mali in January, 2013, to aid the Malian government in its fight against terrorism. Within six weeks, the French soldiers succeeded in recapturing seized towns and driving the terrorists into hiding. French troops have remained in the West African country since, on a mission to stabilise the region.

The attacks in France last week cast a big light on terror organizations all over the world and there were suspicions that other similar organizations might replicate those attacks. The current hostage situation in Mali bears close resemblance to the Bataclan music hall attack. There are reports that a number of French nationals are among the hostages. While Mali certainly has had its own problem with terrorists operating in its northern region, this attack raises the question of possible coordinated strikes on allies of the west which present softer targets because of less extensive security and surveillance abilities. Iraq, Afghanistan, Syria, Nigeria, Libya are all examples of countries attacked by terror organizations because of their relationships with western countries. Other francophone countries within Africa that have close ties with France may also be hit soon.

There are indications that terror group Ansar Dine are responsible for these attacks. Ansar Dine is a militant group in Mali that is reported to have close ties with al-Qaeda. It was primarily responsible for the Northern Malian conflict of 2012 and 2013. This attack could also indicate a battle for prominent public position between Ansar Dine and the Islamic State, to capture attention and  popularity as competition for notoriety and the recruits that come with it heats up between Islamic terror franchise.