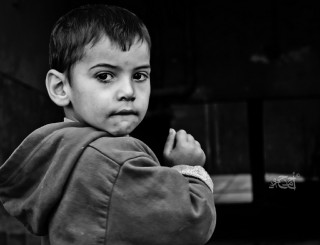 Ahmed Mansour Karni, a 4-year old child, will be spending the rest of his life in prison following a court ruling in western Cairo on Tuesday. The little boy was convicted in absentia for several charges, including murder.

Going by the timeline of events that led to the alleged crimes the youngster is being convicted for, Karni was about 2-years old at the time, as they occurred two years ago during the riots and demonstrations of January 3 2014. But his name was on a list of over a hundred people “wanted” for murder, disturbance of the peace and damaging state property.

Prior to the ruling, a defense attorney, Faisal al-Saud, who said that Karni’s name ended on the list by mistake, presented the child’s birth certificate to the court, but it appears the material was not transferred and that the presiding judge did not review the case. “The child, Ahmed Mansour Karni’s birth certificate was presented after state security forces added his name to the list of accused, but then the case was transferred to the military court and the child was sentenced in absentia in an ensuing court hearing,” said the lawyer.

Although Karni’s birth certificate proves that he was born in September 2012, the court indictment states that the child is guilty of murder – four counts, attempted murder – eight counts, threatening security forces and vandalizing property belonging to the Egyptian Health Administration and vehicles belonging to security forces. How can a two-year old commit these crimes?

In response to Karni’s ruling, Egyptians took to social media blasting the government and the clearly dysfunctional legal system, accusing them of corruption and injustice. An angry Egyptian lawyer, Mohammed Abu Huraira, said that the court decisions can’t be appealed; he issued a response to the ridiculous judgement saying, “On the eve of injustice and madness in Egypt, a four-year old child was sentenced to life imprisonment. He is accused of disturbance, damage to property and murder. The Egyptian scales of justice are not reversible. There is no justice in Egypt. No reason. Logic committed suicide a while ago. Egypt went crazy. Egypt is ruled by a bunch of lunatics.”

A history of unfair trials

When former army chief, Abdel Fattah el-Sisi, was elected president in 2014, he made a pledge to the UN General Assembly to uphold judicial independence, freedom of expression, and the rule of law but, in practice, el-Sisi has failed to walk the walk. Instead, his government extended the jurisdiction of military courts to try civilians and gave room for human rights violations by security forces.

According to Amnesty International, the Egyptian judicial system is deeply flawed. Mansour Karni is not the first child to receive such an unfair and unjust judgement, courts throughout Egypt sentence children to life imprisonment and even death in contravention of both international and Egyptian law. Hundreds of activists have also been sentenced to death after unfair trials on false charges.

Judges fail to follow due judicial processes, as in the case of little Ahmed Mansour Karni, with some trials proceeding in the absence of the defendants and their lawyers. “In many cases, courts convicted defendants despite an absence of substantive evidence against them. The Public Prosecution, increasingly, did not seek to determine individual criminal responsibility, instead bringing identical charges against groups of accused and relied heavily on reports and testimonies by police and security forces…”