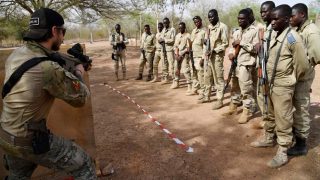 Is Burkina Faso’s latest move to tackle insurgency the right one?

Burkina Faso’s Parliament has approved legislation to arm civilian volunteers with “light weapons” following an attack by Islamic militants that left 36 people dead on Monday, January 20th. Volunteers over the age of 18 will be recruited in different regions in agreement with local populations, given 14 days of military training, after which they will be given small arms and communication equipment.

“These repeated attacks on innocent civilians call for real cooperation between the defence and security forces,” the government said in a released statement. According to Defence Minister, Cheriff Sy, the recruits would be expected to conduct surveillance and provide information and protection for their communities in the event of an attack while waiting for the arrival of security forces. In the end, they will be compensated financially and those wounded on duty will get health benefits.

Despite training and assistance from France and the United States in the past, Burkina Faso’s army remains understaffed, ill-equipped and incompetent to effectively tackle the rising insurgency in the country, hence this end-of-tether decision. But how effective will this move be? Militants in the Sahel are known to exploit ethnic fault lines to provoke inter-communal conflicts. And given the increasing rate of inter-communal conflicts in recent times, is it logical to arm civilians?

Human rights activists have also raised questions about the alleged abuses by Burkina Faso’s security forces during its crackdown on suspected jihadists and the government’s failure to investigate them, AP News reports. “This new plan to subcontract security operations to civilians threatens to lead to even more abuses,” said Corinne Dufka, West Africa director for Human Rights Watch. But Defence Minister, Sy justifies the government’s decision saying that the recruits will undergo a “moral investigation” and be taught discipline before being allowed to serve.

According to a report by Human Rights Watch(HRW), armed Islamist groups have killed over 250 people in Burkina Faso in less than a year, displacing over five hundred thousand. These killings happened in 20 attacks from April 2019 by groups allied with Al-Qaeda and other local armed groups. Witnesses interviewed by HRW said that victims were shot dead in their homes, marketplaces, places of worship, on their way to or back from work and as they transported aid to displacement camps.

The insurgency in Burkina Faso is evolving to be quite critical with an unfolding humanitarian crisis that is damaging to the country’s economy. The United Nations has warned that the number of displaced persons is expected to reach a million in a few months, with children and young girls being most at risk for exploitation and abuse. So far, more than 2,000 schools have shut down, keeping 330,000 children out of the classroom.