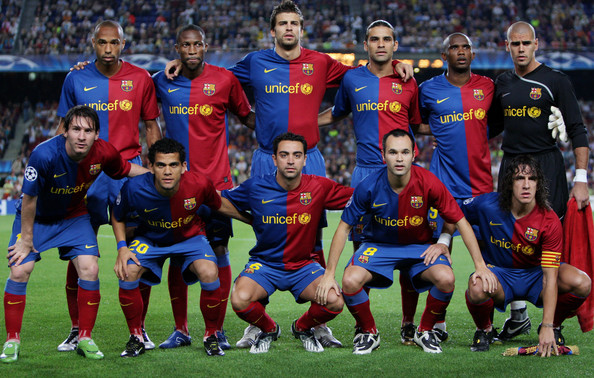 Well, well, what a game at the Nou Camp yesterday between Barcelona and AC Milan. Barcelona reached their 5th consecutive Champions League semi finals—the first team to do so since the format was changed from the European Cup era. However, the 3 : 1 win over the Rossoneri was marred by controversy with Barca’s second penalty a topical issue.  Was it really a penalty? Should it have been given? Was the referee right in awarding it with the game tied at 1 : 1?

The truth is that we are NEVER going to get a right or wrong answer to these questions but I can understand a lot of fans’ frustrations, considering Robin Van Persie’s red card last season and that infamous night at Stamford Bridge in 2009.

However, this blog will try to do a critical analysis of those games to really ascertain if referees favor Barcelona over others:

One of the most controversial games ever in the champions league is the semi final second leg of the 2008/2009 competition. Chelsea fans all over the world will never forget Norwagian referee, Tom Henning Ovrebo, who waved aside about 4 penalty appeals for the Blues. Personally, I think Ovrebo got two of those decisions right, while the other two could have gone either way. Another referee could have given them and it would have been the right decision. Now while Chelsea fans cry blue murder over those two decisions, less is said about Eric Abidal’s sending off.

Many forget Barca did play the last 20/25 minutes of that game with 10 men after Ovrebo WRONGLY sent off Abidal. Replays showed striker Nicolas Anelka tripped himself in the build up to the red. I am pretty sure if Chelsea had made it through to the finals, Barca supporters would have been the one crying foul by now.

Still talking about Chelsea, Jose Mourinho’s side beat Frank Rijkaard’s team 5 : 4 on aggregate way back in 2005 with both legs of the ties ending in controversies. Didier Drogba got sent off in the first leg for a second yellow in what many still consider a wrong decision with Maxi Lpoez (now with AC Milan) and Samuel Eto’o getting the 2 goals to beat the Blues 2 : 1 at Camp Nou. However, the real controversy was John Terry’s late winner at Stamford Bridge which sealed the tie. Replays ( http://youtu.be/gr2N2A_M_Bo) showed Carlvahho pulled back and obstructed Victor Valdes as Terry’s header beat the keeper. Unfortunately, we hear less of that incident being played out.

Mourinho again played against Barcelona but this time with his treble winning Inter Milan. The second leg at Camp Nou was controversial after Inter midfielder and former Barca player Thiago Motta was WRONGLY (in my humble opinion) sent off in the first half. Barca midfielder Sergio Busquets did try to make much out of Motta’s challenge and the red shouldn’t have been given (even though some would argue, and probably rightly so, that any arm across the face deserves a card). This incidence is regarded as one of the big examples to show refs favouritism towards Barca.

However, a very important incident seems to have been overlooked. Striker Bojan Krkic (now with AS Roma) did score what could have turned out the winning goal late in the second leg but ref Frank De Bleeckere ruled it out.

More so, In the first leg that Inter won by  3 : 1, Diego Milito’s 3rd goal (which turned out to be the winner after all) should have been ruled out as the Argentine was marginally offside (http://youtu.be/BzWLT9IfTWQ ) when Sneijder headed the ball to his part in the build up to the goal.  How come less people talk about this?

Another controversial game from last season was Barca’s 2 : 0 win at the Bernabau. Many saw Pepe’s red card in the first half as the catalyst to the Blaugrana’s win. Earlier in the season, Jose Mourinho decided to match Barca’s attacking play and got walloped by 5 : 0. In the reverse fixture, Mou employed Pepe in the midfield and got a 1 : 1 draw. With this success, Pepe was again used in the champions league, the Portuguese had the measure of Lionel Messi with the Argentine only able to show his dominance after Pepe had been sent off. Question now is, was his sending off right? Judging from the laws of the game, yes. But, maybe, just maybe, a yellow would have been enough.

As an Arsenal supporter, this is one game that really, really gets me upset every time I think about it. With the game tied at 1 : 1 and Arsenal having a 2 : 1 first leg lead, striker Robin van Persie was sent off for a ridiculous second yellow after he kicked the ball after the ref’s whistle was blown. While, the ref may have been right to follow the rules of the game, it has been argued that he should have used his discretion especially with RVP’s argument that he didn’t hear the ref’s whistle go and actually kicked the ball just one second after it. But then again, here’s an incident we get to hear less about:  in the first leg at the Emirates, Lionel Messi scored a perfectly legitimate goal, which was ruled out for a non-existent offside. In the second leg at Nou Camp, if the self acclaimed world’s best striker Nicklas Bendtner, had scored that last minute opportunity to send Barca out of the competition, perhaps, Messi’s “goal” may have become significant.

In fairness, while it may be argued that Barcelona may have had the rob of the green in several cases, it is safe to also say that several injustices meted out to them haven’t been highlighted like the way the ones that they have benefited from. Whether or not UEFA has had a hand in their victories like many suggest remains what is: an accusation that may never be proven. But then again, what is football without controversies?