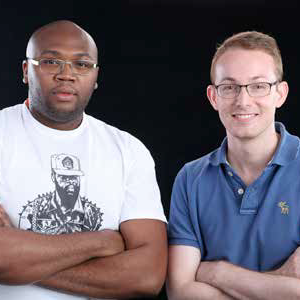 How To Make A Million Bucks Out Of Nollywood

It is late afternoon when I am shown into Jason Njoku and Bastian Gotter’s office in the Lagos branch of iROKO, having waited in the reception area for a short while alongside a man who looked oddly familiar but whose name I just could not place. “Did you speak with Chika Nwobi?” Njoku asked me after we exchanged greetings. “Who?” I asked. “The tall guy in the lobby,” he replied. Of course! Chika is the founder of Level5Lab (L5Lab), a leading business incubator. He is also a major investor in Nigeria’s leading recruitment site, jobberman.com, an automobile trading site, Cheki.com, and mobile communications company, Mtech. “He’s the God of Nigeria’s web start-up scene,” says Njoku, animatedly.

These young men are among a handful of intrepid entrepreneurs pioneering online business in Nigeria, investing resources in paths never before trailed and diversifying the economy. In the process, they are helping to grow a Nigerian e-commerce industry currently worth $250 million.

In early 2010, Jason Njoku, a 32-year-old UK-born Nigerian, had a great idea: to sell Nollywood VCDs to Africans in the Diaspora via the Internet. Churning out 2,000 movie titles each year, Nollywood is the second-largest movie industry in the world.

Njoku raised funding with the help of his German friend, Bastian Gotter, who became iROKO’s first investor. Njoku then travelled to Lagos to purchase a wide selection of Nigerian movie VCDs before returning to the UK to sell them. “We didn’t make any profit,” says Gotter. “We didn’t have a marketing budget and many people didn’t know about it.” The venture generated around £150,000 ($228,600), though it had cost as much to set it up and get started.

At the time, video streaming website YouTube had grown so large that it had been acquired by search engine giant, Google. The iROKO partners decided to scale on the infrastructure and reach of YouTube to provide Nollywood movies to fans all over the world. Their plan, however, was flawed: YouTube permitted only 15 minutes of video upload. Nonetheless, in October 2010, Njoku and Gotter started their YouTube channel, Nollywood Love, and uploaded hundreds of movie titles, though regular 15-minute advert intervals interrupted the films. With millions of monthly views coming from Africans in developed countries, these advertising breaks generated revenue for the start-up. “A couple of hundred thousand dollars,” says Gotter. “Eventually we got to know YouTube was running this program that allows owners of licensed movies to become partners, upload full-length movies without the 15-minute restriction and get paid 50 percent of revenue from YouTube ads on their channel.” Adds Njoku: “Once we knew that piece existed, we thought, ‘Hold on, we can do our business the right way’. We’d had some conversations with movie producers and they were willing to sell their distribution rights cheaply.”

Within a week of this, Njoku travelled to Alaba, one of Nigeria’s biggest electronics markets and the hub of movie producers, to acquire the necessary legal licenses. He paid as little as $100 per title but says the company now pays between $10,000 and $25,000 for distribution rights to a movie. This year, they have set aside $3 million for content acquisition.

In mid-2011, a US-based investment fund, Tiger Global, contacted Njoku and Gotter to offer them an investment of $3 million. “No pitch. No PowerPoint slides,” quips Gotter. To date, iROKO TV has raised $8 million in funding – $6 million from Tiger Global and $2 million from Swedish investor, Kinivik. Gotter’s first investment of $150,000 in iROKO TV meant he controlled a 50-percent stake, though Gotter says he and Njoku now own a much lower percentage of the company.

Currently, Nollywood Love records over eight million views per month and generates annual revenues in excess of $1 million. Njoko and Gotter were smart enough to set up a spin-off site of sorts, a personal website where premium viewers can subscribe to watch the latest Nollywood titles for $5 per month. “We wanted to establish another revenue generation model,” explains Njoku. “I can’t disclose the exact figures but we have a subscriber base of between 15,000 and 25,000 and it’s growing very fast.”

iROKO is currently the largest distributor of Nollywood movies worldwide. The company has grown from a staff of five to over 80 employees. On the back of four offices, one each in Lagos, South Africa, London and the US, the Nigerian digital distributor has expanded operations beyond the Internet to DVD sales, cinema screening and TV station and airline distribution.

“It is a ridiculous state of affairs that flights in or out of Africa usually have 92 to 95 percent of Africans but the content catalogue on these carriers is mostly Western movies. They are not what the passengers actually want to watch,” says Gotter. Realising this, the pair approached several airlines, which embraced the concept of featuring Nollywood movies onboard. “They are ordering and reordering. That adds another layer of profit to the industry,” says Njoku.

The pair feels that the industry has incredible potential, much of which is still untapped. “Nollywood has not monetised itself,” says Gotter. “The industry has reduced itself to DVD and television. We came along and opened up the Internet distribution channel. We are now opening up other channels for Nollywood to be seen to fully monetise the whole spectrum of what the industry can be. If that is not done, the industry could die because of insufficient revenue generation. We’re here to make enough money for the industry and through that expand Nollywood and our business. Now when I approach local movie producers and pay for their online distribution license, I tell them on top of that, I’ll pay extra for their airline and TV distribution rights. That’s on aggregate more money than that guy is ever getting paid from DSTV!”