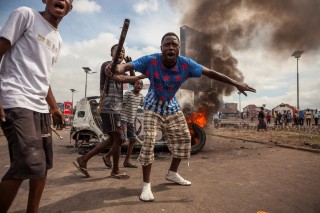 A report by the United Nations Refugee Agency (UNHCR), shows that in the last two months, over 200,000 people have been forced to flee the increasing violence between the Lendu and Hema groups in the eastern region of the Democratic Republic of Congo (DRC).

As the number of inter-ethnic and counter attacks between Lendu farmers and Hema herders increases, the UNHCR report shows that 5 million people have fled DRC, including 1.2 million in Ituri province.

Also in the last 60 days, the U.N. monitors have recorded more than 3,000 serious human rights violations in Djugu territory, mainly occupied by the Hema.

The Lendu and Hema have been fighting sporadically for decades over valuable resources in their gold and oil-rich province. However, recent tensions in the region have been rising since December, following a government-led military operation against various armed groups.

According to Yaxley, “Displaced people have reported acts of extreme violence with at least 274 civilians killed with weapons such as machetes, while over 140 women were raped and almost 8,000 houses set on fire.”

“The vast majority of those displaced are women and children, many of whom are now living under crowded circumstances with host families from the community, while others are forced to sleep in the open or in public buildings under very insecure conditions,” he said.

As a result of the conflict and growing numbers of refugees and displaced people, social distancing during this COVID-19 pandemic in the conflicted country is next to impossible.

Many people are forced to live in already crowded shelters, which makes them vulnerable to further attacks, hunger and little protection in terms of preventing the spread of the virus.

More so, international organizations are unable to provide assistance, as access to the Djugu and Mahagi regions are heavily restricted. People in these regions are left in dire situations with no access for external help.

Nevertheless, the UNHCR and other agencies are working together to provide relief and build more shelters for the displaced. The agency report shows that only 18 percent of its $154 million appeal for the DRC has been received to date.

According to the agency, lack of funding, as well as the prevailing insecurity, are affecting its ability to provide essential relief to the thousands of displaced citizens.

The humanitarian situation in the Democratic Republic of Congo (DRC) continues to deteriorate due to the activities of armed groups, intra and inter-ethnic/communal violent conflicts, epidemics, natural disasters, and food insecurity.

According to the 2020 Humanitarian Needs Overview (HNO), the number of people in need of humanitarian assistance will increase from 12.8 million in 2019 to 15.9 million in 2020.

The pandemic has created an additional pressure on the already overburdened health and social service delivery systems, exacerbating the vulnerabilities of affected populations.