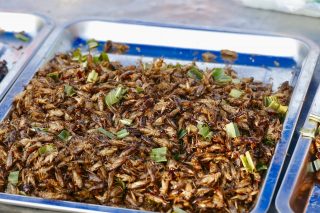 How Africans are tapping into the projected $7,956 million global edible insect market

In a village in Kenya, Charles Odira, a cricket farmer, rears insects and mills them into flour. Odira explained to Business Daily Africa that he decided to venture into cricket farming because of the insect’s high protein content which is higher than that of beef and chicken. The venture which started about five years ago began with 640 crickets (480 female and 160 male) in four crates now has six concrete pens, ten plastic crates with 1,500 crickets in each.

These crickets which take about three months to mature are fed with vegetables, soy flour, and water. Odira majorly rears the Acheta species which experts say has more fatty acids, is tastier, rich in zinc, iron, and calcium. Being aware that the society is hesitating to accept insects as an alternative source of food and finding it difficult consuming it whole, the farmer decided to add value to it by processing it into flour.

The process involves capturing mature cricket, blanching them after which they are left to dry in solar driers. This process gets rid of any bacteria present in the insects. “We mill the crickets into fine powder. We use it as a key ingredient in making cakes, bread, cookies, and waffles. The response from consumers is good. People are increasingly appreciating our products. Our customers keep coming for the bread made from cricket. It seems they have acknowledged the value of cricket to their health,” explains Odira.

He sells a kilo of whole crickets at Sh1,000 while a kilo of those milled goes for Sh2,800. A 400g of bread goes for Sh50, waffles and cupcakes cost Sh25 each while cookies are priced at Sh10 apiece. The enterprise makes the products based on orders and sells them mainly to locals and in exhibitions.

However, based on application, the market is classified into animal feed, human food, and others. By type, it is segmented into beetles, termites, caterpillars, locusts, grasshoppers, mealworms, and others. Edible insects such as ants, wasps, bees, flies, scale insects, termites, cockroaches, crickets, beetles, and grasshoppers are rich sources of nutrition for poultry.

Also in South Africa is Gourmet Grubb, a Cape Town-based start-up. The company uses ice cream to introduce the public to the world of eating insects. These ice creams are made from EntoMilk, a dairy alternative made by blending the larvae of a tropical insect known as the black soldier fly. It has just three ingredients: honey, flavourings (such as cocoa or chai spices), and the magic ingredient, EntoMilk and is lactose-free.

In 2016 an international team of scientists sequenced a protein crystal located in the midgut of cockroaches. Diploptera punctata, a species of cockroach which is known to give birth to live young ones (instead of laying eggs like regular roaches) produces protein crystals that are what scientists call a complete food, containing proteins, fats, and sugars. Just one of these crystals has more than three times the amount of energy in an equivalent amount of buffalo milk – which has more calories than plain old cow’s milk.