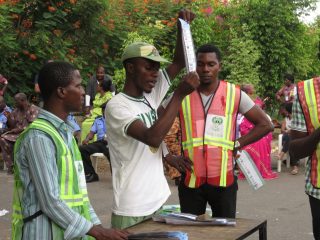 INEC releases timetable for 2019 elections as the race to Aso Rock begins.

While many Nigerians are still coming to terms with their decisions during the 2015 presidential election, the country’s electoral body has released the time-table for the 2019 elections. Along with dates for presidential and parliamentary elections, the Independent Electoral Commission (INEC) also set a deadline for political parties to present candidates for the 2019 elections.

In a statement released to the public on Wednesday, INEC promised to stick closely to the election timetable. “The Commission wishes to assure Nigerians that we are determined to strictly adhere to the timetable and schedule of activities,” it said in the statement. Nomination forms for elections will be available from the 11th of August till tje 24th of August 2018. Political parties will select candidates before October 7 while election campaigns for Presidential and National Assembly elections will begin on the 18th of November , with December 1 for Governorship and State Assembly elections. Parliamentary and presidential elections will be held on the 16th of February, 2019, which will also signal the end of Muhammadu Buhari’s ‘first term’ in office.

Although Buhari is yet to express his interest in running for a second term in office, many of his supporters have are firmly behind im if he decides to do so. His Minster of Communication, Mr. Adebayo Shittu last week announced that he has appointed a national chairman of “the Board of Trustees of Muhammadu Buhari/Osinbajo Dynamic Support Group.” Though he didn’t mention the name of the supposed chairman, his statements show there are some who believe Buhari has done well so far as president.

The jury is still out on whether Buhari’s first term has been a success. Buhari made many election promises but has so far failed to achieve most of them. A premature declaration of a technical defeat of terrorist group Boko Haram in December 2015 hasn’t stopped the group’s attacks on civilians, a new security threat to Nigeria, the “Fulani herdsmen”, is brewing in its Middle-belt region, while a recent recession due to bad fiscal policies coupled with slow economic growth has increased the number of unemployed Nigerians. These are some of the challenges of this present administration. A string of inefficient ministerial appointments made six months after Buhari’s inauguration, ironically because he wanted efficient appointments, have also enacted policies that have not addressed Nigeria’s problems. Even his much vaunted fight against corruption has been largely targeted at people belonging to opposition parties.

Most pressing, however, is the seeming dearth of candidates to contest in next year’s presidential elections. The only notable name has been Atiku Abubakar, a member of Nigeria’s ‘corrupt old guard’ according to many Nigerians, who is set to contest under the People’s Democratic Party, Nigeria’s former ruling party.

Nigeria, with its more than 180 million people, has only Buhari and Atiku as reluctant candidates; that is a big problem.