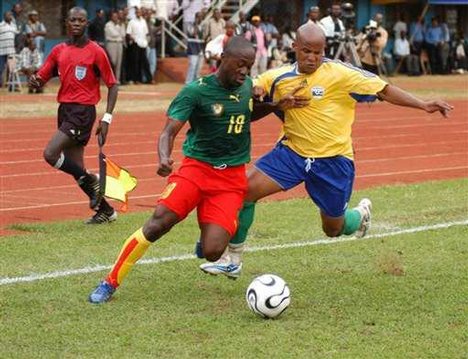 As the qualifiers for the 2013 African Cup of Nations (AFCON) as well as the 2014 World Cup gets closer, Cameroon is trying to put its house in order to beat the challenges ahead.

Cameroon’s sports minister, Adoum Garoua, plans to meet senior players of the country’s national team, the Indomitable Lions, to discuss financial and organisational problems facing the squad. However, the meeting, which was scheduled for the 8th of May has been postponed.

But sports minister Garoua says the meeting will be “a working session to improve the working conditions and performances of the players.”

He also adds that “the team is undergoing restructuring and there is a need for partnership and dialogue.”

Senior players Eyong, Stephane Mbia, Alex Song and Nicolas Nkoulou will negotiate with the Cameroonian government and Garoua admits “allowances, appearance fees, transportation, and medical facilities” will be all on the agenda.

Cameroon play Libya and DR Congo in June in World Cup qualifiers and face Guinea-Bissau in the second leg of the 2013 AFCON qualifiers where they have a 1 : 0 lead.

Meanwhile, Garoua has revealed he is waiting for a report from the Cameroonian Football Federation (FECAFOOT) regarding their removal of legend Roger Milla as the federation’s honorary president.

“I am waiting for a report from the federation in order to get a deeper understanding of their action,” the minister said. “The place of Roger Milla in the promotion of sports cannot be underestimated.”