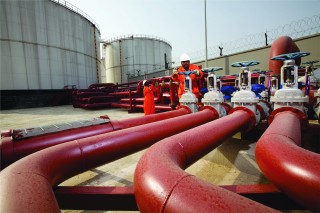 The current state of Nigeria’s oil sector has been described using every catastrophic adjective available, as it seems unlikely that the country will come through the lingering oil crisis. A couple of factors have necessitated such pessimism: prices have remained very unstable and Nigeria seems to be losing its crude buyers by the day. These two have together driven down the value of the Naira, trimmed Nigeria’s revenue, and collapsed its stock exchange.

The potential re-entry of Iran into the global oil scene is expected to worsen the already grim situation for Nigeria. By December, Iran will be allowed to sell its oil to the world after it had a long-standing embargo on crude sale lifted by global superpowers last week.

Iran had the second-biggest output in OPEC before the European Union banned purchases of its crude in July 2012. The country is now fourth-largest in the Organization of Petroleum Exporting Countries, with output in June averaging 2.85 million barrels a day compared with 3.6 million at the end of 2011.

Bijan Namdar Zanganeh, Iran’s oil minister, confirmed after a meeting with the German Chancellor Angela Merkel that it will be entering the oil market in the coming months, adding that Tehran plans to restore output to the level it achieved before the economic curbs crippled production and exports.

Iran wants to pump almost 4 million barrels a day within the first seven months it begins trading with the world, according to Zanganeh. It also plans to raise that by a further 1 million barrels soon after. Experts predict that Iran will turn to two of its key previous clients, Europe and India, for crude exports. This will virtually plunge Nigeria into chaos as both make up its two biggest export markets.

India, however, may have averted such impending implosion after suggesting it was willing to up its oil imports from Africa’s biggest producer. The Asian economic giant is keen to lift more crude from West African countries as it shifts focus from the Middle East, and Nigeria looks the best bet for holding a long term agreement.

Nigeria drills an average of 2 million barrels of oil daily—ahead of its closest competitor Angola—much of which is purchased by India. In May, India purchased 2.45 million metric tonnes of crude from Nigeria, up 34.64 per cent year-on-year and a near five-fold jump from April.

India is said to favour Nigeria’s crude because it is largely light and sweet. This, reports suggests, fits the workings of its public refineries including Indian Oil Corp, Bharat Petroleum Corp Limited and Hindustan Petroleum Corp Limited, all of which are major recipients of Qua Iboe, Bonny Light and EA Blend from Nigeria.