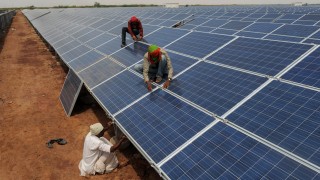 India just launched the largest solar farm in the world

India has launched the world’s largest solar power plant following the completion of its new facility in the southern India state of Tamil Nadu. The 2,500-acre facility was built in just eight months in spite of unfavourable weather conditions and has a capacity of 648 megawatts.

India’s Kamuthi solar plant which costs a total of $679 million has overtaken the Topaz Farm in California, USA, which was completed two years ago and has a capacity of 550 megawatts.

The quest for cleaner energy sources has seen an increase in funding for similar power projects all over the world, as countries seek cleaner energy sources. The sun has always been a viable alternative power source. Abundant sunlight in India makes the country a perfect candidate for solar energy installations as about 300 million people are not connected to the electricity grid. India is expected to become the third largest producer of solar power in 2017.

By 2022, India aims to power 60 million homes by harnessing 100 gigawatts of solar energy. The government’s goal is to generate 40 percent of its energy needs from non-fossil fuels by 2030.

India hopes to reduce carbon emissions by up to 35 percent and produce 40 percent of its power from renewable sources by 2030.

Meanwhile, in Africa, the Ouarzazate Power Station in Morocco, which commenced power generation in February 2016, is expected to produce 580 megawatts when finished. The plant is still being built and expected to be the largest solar plant in the world by 2030.

The recent deployment of solar energy has been made possible by a sharp drop in the costs of production of electricity through photovoltaic cells. The costs have come down by 80-85 percent in the last seven years, thanks to a rapidly growing demand as countries look to move away from fossil fuels on climate change concerns.

This has made solar energy very competitive in comparison to more traditional sources of electricity generation like coal-fired thermal power plants. The total installed capacity of solar energy across the globe has risen by almost eight times during the same time.

India’s project could not have come at a better time following Paris and Marrakech climate commitments for countries to be fully decarbonised of energy around 2040.