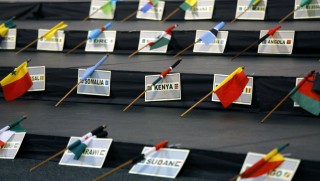 The summit began on Monday the 26th, with the theme – “Partners in progress: Towards a Dynamic and Transformative Development Agenda”. It ended Thursday night with a banquet for the leaders of the 54 countries in participation. Some African Heads of State were given the opportunity to address the delegates, the likes of whom are President Kenyatta, President Buhari, and President Zuma.

In his speech, Nigeria’s President Buhari reiterated the commitment of his administration in tackling corruption, recovering stolen funds, and defeating Boko Haram. He said that if the current positive trend in the fight against terrorism in Nigeria is maintained, that the country will succeed in permanently turning the tide against the Boko Haram insurgents by the end of the year.

“The anti-corruption campaign will be on-going for many years. We are committed to the enthronement of good governance that plugs the loopholes in public sector accounting, and the use of scarce resources for public good … We will continue to prosecute those who have been indicted for corrupt practices and ensure that stolen funds are recovered, to serve as deterrence to others who nurse the ambition of seeking public office solely for illegal personal gain.”

President Buhari also assured the delegates that the Nigeria’s economy would be fixed, with increased job creation, and better infrastructure, especially in the areas of power and transportation. “On the economy, our aim is to address the challenge of infrastructure in all its ramifications, especially power and transportation. We are seeking to create jobs through agriculture, mining, industrial value-addition and the promotion of small scale enterprises.”

At the summit, President Uhuru Kenyatta pushed for a shift in the Indo-Africa trade. He said for trade with India to deepen, Africa must move aggressively to develop its manufacturing base. This will see Kenya and other African countries focus on value addition instead of the export of raw materials.

Kenyatta said despite the fact that Indo-African trade has recorded significant success in the last few years, “it has the capacity to grow faster, deeper and broader.” But for that to happen, there must be a shift from the traditional focus on the export of primary commodities to an aggressive development of Africa’s manufacturing base and value addition.

Regarding the health sector, President Kenyatta asked for the cooperation of Indian pharmaceutical companies to set up more drug manufacturing plants in all areas of interest, especially in oncology and cardiology, in order to strengthen the capacity of the health systems in Africa.

“When it comes to medical tourism, we are very grateful that India has opened up its facilities to our people and over 10,000 Kenyans are coming for medical treatment for various diseases. I believe this number could be much larger if we could partner much more strongly … We would be willing to work with you to see how we can get you land for development. We can work and partner together on a win-win basis. That is one area I would like you to seriously consider.”

Kenyatta also called for a global cooperation in the fight against terrorism, saying it cannot be tackled by one region, alone. “ … We all know, we have all tried. There is no country that is too far, safe or free from terrorism.”

South Africa’s President Zuma called for a deeper engagement between India and Africa, saying the India-Africa partnership is a vital tool in the development of both partners. “The aim of this Summit, as aptly stated in the theme, “Partners in progress: Towards a Dynamic and Transformative Development Agenda” is to ensure a new focus on specific areas of cooperation and thereby fulfilling the promise of a better life for all in Africa and India.”

The South African president called for further partnership in dealing with issues of marginalised youths and women in Africa, since “India has a distinct advantage of being endowed with human resource skills and technology which are relevant and can be applied to the ecological and geographic conditions of Africa.”

President Zuma, like Kenyatta, also called for a solidarity in the fight against terrorism. “Today, we leaders of the world face many challenges. More recently, these include terrorist threats from the Middle East and northern Africa, the current climate change worldwide and the associated increased migration to developed countries of those currently suffering from war or economic marginalisation.”

Zuma, in his speech, said Africa was particularly keen on benefiting from India’s wealth of experience in vocational training in small scale industries and entrepreneurial development, as this will create employment opportunities for African women and youth. “It is imperative that the collaboration at the continental level be mutually beneficial and take into account the African Union’s Agenda 2063 Vision and the integration agenda of Africa.”

The India Africa Forum Summit 2015 was a success, with its apex point being the grant of a $10 billion loan from India to Africa, within a five year span. Prime Minister Narendra Modi also announced a grant assistance of $600 million to Africa in the same period, including scholarships for 50,000 African students in India in the next 5 years.