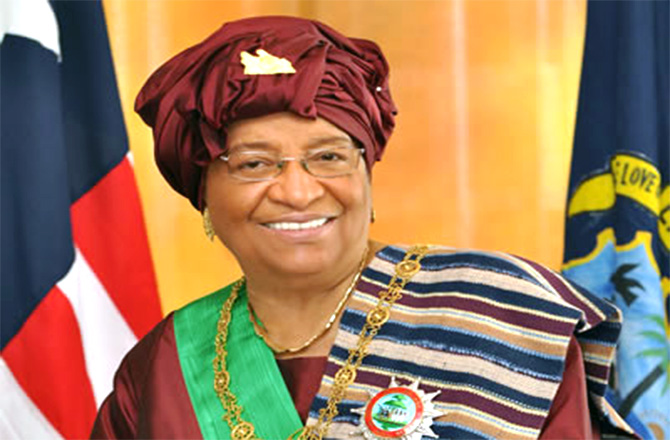 In Perspective: Ellen Johnson Sirleaf And The Liberian Dream

of Africa’s oldest presidents joining the likes of Cameroon’s Paul Biya and Zimbabwe’s Robert “Bob” Mugabe. Head of one of Africa’s and the world’s most corrupt states. Former President of the Liberian Bank for Development and Investment in the administration of Master Sergeant Samuel Doe, a former Liberian military president who seized power in a 1980 military coup that executed all but four members of President William Tolbert’s cabinet by firing sqaud. Former supporter of Charles Taylor, the former Liberian president imprisoned for war crimes and crimes against humanity; and fundraiser for Taylor’s war efforts against Master Sergeant Samuel Doe which led to the first Liberian Civil War. This is not a feel-good story of gleeful development and growth. But stories change…

Ellen Johnson Sirleaf  is also Liberia’s first president after two decimating civil war; Former Minister of Finance under Liberian President William Tolbert and one of only four members spared execution by the firing squad after Samuel Doe seized power in a 1980 military coup. Challenger to former Liberian President Charles Taylor after the first Liberian Civil War and head of the Governance Reform Commission after the second Liberian Civil War, winner of the Nobel Peace Prize and a woman of history, substance and transformation.

As Africa’s first female head of state to Africa’s most corrupt country, Ellen Johnson Sirleaf is a target for admiration and disdain. The Harvard-educated and former World Bank economist is leading an unexpected economic and political transformation in one of Africa’s smallest countries, long-considered an economic wasteland and war zone.

The second Liberian Civil War ended more than 10 years ago on August 14, 2003. Back then, few analysts would have predicted that the star on Liberian flag and the stardom of Mrs. Sirleaf would shine so bright again. Yet, since Mrs. Sirleaf’s ascension to the presidency in 2006, the country has annually grown on average 11.6%, according to the World Bank statistics. A full year of post-conflict iron ore exports and a robust services sector, including striking growth in the construction sector, helped to expand the economy by 10.8% in 2012. The economy is expected to grow by 8.1% in 2013 and 7% in 2014, according Ms. Corinne Delechat speaking on behalf of the International Monetary Fund (IMF) in Monrovia.

The Liberian Senate recently approved a $553 million budget for the fiscal year ending June 30, 2014, a stark contrast to the measly $80 million afford Mrs. Sirleaf in her first year. A recent announcement by European Union (E.U.) Commissioner Andris Piebalgs that the E.U. would extend an aid portfolio of approximately $384 million to Liberia for the period of 2014 – 2020 signifies that donors growingly believe in the Liberia’s maturation. According to Andris, the E.U. commission has seen “true transparency” and “accountability” in use of public resources, something that would have been difficult to believe if the commission had not seen it during a visit to Liberia.

Debt providers have rewarded the country for its improved public management. The United States (U.S.) first granted debt relief to the country in 2007, waiving $391 million in debt. In the same year, the G-8 paid 60% of Liberia’s debt (or $324.5 million) to the IMF. Two years later, the government wrote off an additional US$1.2 billion in foreign debt through a debt buy-back at a 97% price discount, financed by the International Development Association (IDA), the United States, the United Kingdom, Norway and Germany. Further debt relief through the Heavily Indebted Poor Countries (HIPC) Initiative, agreements with the World Bank/IMF, and unilateral forgiveness by international parties, including the Paris Club, has amounted to more than $3 billion since 2010.

But the economic growth and budget-related figures, paired with the international support, overshadow continued challenges in the still relatively fragile post-conflict country. An estimated 74% of the country’s population is involved in what is best described as ‘vulnerable’ employment’ (in other words, informal and non-guaranteed contracts or engagements). More than 65% of the population is under the age of 30. Their employment and education prospects are low and disastrous for the long-term prospect of the country. True figures remain opaque but estimates of unemployment go as high as 80% for those under the age of 30. Increased prostitution and youth violence underscore these concerns.

Consumer inflation will grow by 8 percent in 2013 due to rising food prices and exchange rate depreciation.  Unless inflation is controlled in the near term, it could threaten economic security and create greater social unrest. Subsidies and other related transfers, nearing $90 million in 2012, have grown nearly ten-fold from approximately US$9.5 in 2006 during Mrs. Sirleaf’s first year. Further boosting subsidies to appease the local youth is not an option, at least not in the short term. Education spending will have to grow in the long-term to ensure the country capitalizes on its abundant youth.

Mrs. Sirleaf openly recognizes that her administration needs to do more to create jobs and stabilize the economy. When she won re-election in 2011, she pledged to annually create at least 20,000 jobs. Her efforts toward this goal include attracting large foreign investors.  Mrs. Sirleaf’s administration accordingly has established major iron ore agreements with ArchelorMittal and China Union Investment and lucrative palm-oil agreements with Firestone Natural Rubber Company and Sime Darby Bhd (SIME). Other resource-based agreements have been made with international mega-companies such as BHP Billiton and Chevron Corp.

Extracting natural resources is part of her national growth plan. Speaking to a private delegation from France earlier this year, Mrs. Sirleaf reiterated her position that Liberia, as a “natural resource country,” must build good public private partnership to develop the country. Existing mining projects account for 60 percent of government revenues. Critics argue that she has not performed up to par with transparency and fairness with these deals. But she has done her best to navigate her country’s pervasive history of corruption and will continue to improve. And, as she indirectly argues, the country’s empty coffers necessitate that the country capitalize on natural resources to invest in better economic and social infrastructure.

Her economic agenda cannot be limited to natural resources, as she has diligently noted, at events including the Micro, Small and Medium Enterprises (MSMEs) conference. Earlier this year, she dedicated a new multi-million dollar poultry farm owned by former Nigerian President Olusegun Obasano. She identifies the development of MSMEs as central to further growth in the country. Her administration has overseen the establishment of the Liberian Innovation Fund for Entrepreneurship (LIFE) and a One-Time Tax Clearance Waiver.

MSMEs continue to fill gaps in the infrastructure and agricultural network. Falama Inc., for example uses the country’s plantain wealth to create a plantain flour to combat food deficit and imported food costs. Efficient Logistics provides vehicle equipment and logistics advice demanded by the unpaved, rough terrain of the country. Resource extraction, in Mrs. Sirleaf’s perspective, is only part of the equation.

Investment costs still remain a problem. High electricity costs hurts MSMEs across the country and a major barrier to progress. Basic water and sanitation infrastructure is sub-par while road and transport networks limit economic activity throughout the country. The labor force is relatively unskilled despite increase efforts to promote technical and vocational training. Yet, despite growing criticisms around these economic costs, Mrs. Sirleaf remains steadfast that country is going in the right direction. Speaking at the United Nations this year, she willingly submitted to criticism that more has to be done but added that the country is on track in creating “irreversible progress.”

Not completely sold on the country, investors have to take solace in the current progress. All indicators point towards continued success. Still high, inflation and unemployment are decreasing. Mrs. Sirleaf’s reluctance to rapidly balloon the budget can be read as not putting enough money toward education and job growth, or more correctly, as slowly growing the country’s financial capacity and slowly taking on external debt.

This is the woman who transferred her office to the Foreign Ministry building following a fire in the Executive Mansion because she did not think financing the refurbishment of the Mansion was a priority in cash-strapped times. Complaints about rule of law and freedom of press have some basis. But Mrs. Sirleaf did sign a Freedom of Information bill into law and has leaned heavy on the most conspicuous perpetrations of corruption.

There is a renewed sense of hope and vibrancy in the air. An older Mrs. Sirleaf may not have the energy of the young Assistant Minister of Finance that challenged the “offshoring” of profits and loss of tax revenue in the 1970s before it was the “cool thing to do.” But she is an experienced and cautious leader of a fragile country that needs a tough force with soft hands at every step. She knows Liberia is not a fan favorite in the sense of African countries but its star is rising. And, as in most sports, you usually are an unexpected emerging star before you become a natural fan-favorite.