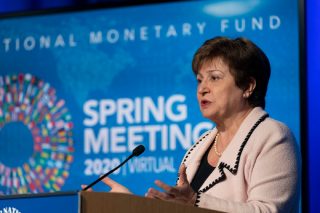 The importance of having China onboard the Group of Twenty debt relief initiative for the world’s poorest countries to weather the ongoing crisis cannot be underestimated, International Monetary Fund Managing Director Kristalina Georgieva said Friday.

Georgieva told a Reuters Newsmaker webcast event that the Asian nation, Gulf countries, and other non-Paris Club members have agreed to act in a multilateral setting, which is significant because solving problems in multilateral settings is much more effective.

“For us, we see this engagement with China (a major creditor for low-income countries especially in Africa) as one, but not the only one, that would determine whether we are in a position to avoid the kinds of unruly behaviors that get to be known as disorderly defaults,” the IMF chief said.

The debt relief offered by the Group of 20 major economies could provide about $12 billion in extra liquidity through the end of the year for smaller economies hard hit by the pandemic, most of which are in Africa. But it had drawn applications from only half of 73 eligible countries as of June 3, and private sector participation has been halting.

The composition of lenders to developing economies has grown so diverse over the years with the private sector playing an increased role, complicating efforts to agree on a joint framework for the debt relief plan. “There’s another player much more important than a couple of decades ago and this is the private sector,” Georgieva said. “If you look at the structure of debts in many African countries, Eurobond issuance, private sector loans are sometimes bigger than anything else.”

Getting the private sector to fully commit to the plan would require the Fund working “systematically” towards a way in which debt issues can be resolved with as little scarring as possible for the countries themselves and for the financial system, Georgieva said.

“Today, we have the Paris Club as the only institution with longstanding principles on the basis of which they engage (with debtors). We (the IMF) have to build up these kinds of principles in a broader sense and we see our role being that of constructive engagement because we are the institution that, by the virtue of our global mandate and our engagement with countries on a regular basis, can contribute quite significantly,” she said.

The Fund has been rapidly deploying some $100 billion in emergency financing and has now provided loans and grants to 72 countries in just over seven weeks, Georgieva said. But there have been warnings that low-income and emerging market economies will need more than the initial estimate of $2.5 trillion to weather the fallout from the pandemic.

The global economic crisis could ultimately test the Fund’s $1 trillion in total resources, “but we’re not there yet,” Georgieva said, adding that IMF member countries were standing by to provide more support to the Fund if necessary. “Our members are telling us, ‘Everything is on the table. You come to us if you need to do more of something, we are there for you.’”

The IMF on Tuesday forecast a deeper global recession than initially anticipated, as business closures, travel restrictions, and social distancing measures persist in most countries. It now anticipates a global gross domestic product contraction of 4.9 percent this year and a total output loss of $12 trillion through the end of 2021.

With the coronavirus pandemic showing no signs of slowing down across the world, it was now clear that an economic recovery would have to get underway without a medical breakthrough and the virus still widespread throughout the world, Georgieva said.