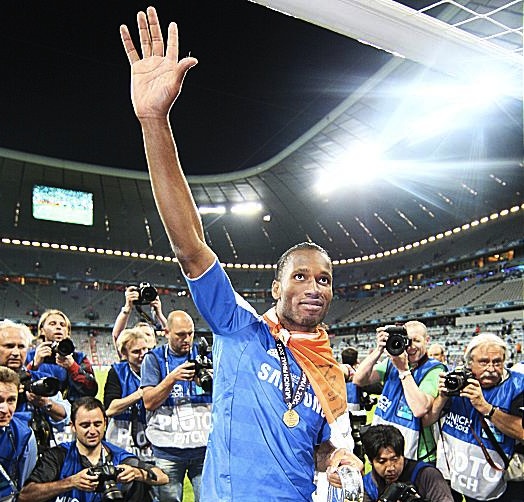 If reports coming from France are anything to go by, then Saturday’s Champions League winning penalty will be Ivorian Didier Drogba’s last kick for his English club Chelsea.

France Football magazine quotes Drogba as saying his time is up at Stanford Bridge.

“I have decided to leave… We (he and his team-mates) will not be together next season,” Drogba reportedly told the magazine.

The Chelsea legend believes he cannot cope with life on the bench as the newly crowned European Champions are set for a summer of changes.

“I had no great desire for this end. But I don’t envisage sitting on the bench watching others play at a time when the club is looking at putting together a new team. ”

Drogba also revealed how emotional it was telling his team-mates about his decision.

“I wanted to tell them to their faces. But I couldn’t do it. They made me break down. Even if it had been three years that I have said I wanted to leave, I found it hard to admit that it was finished with me and the club.”

Didier has been a wonderful servant for Chelsea in the last 8 years winning 3 league titles, FA Cups and 1 Champions League crown.

The 34 year old has been linked with Spanish giants Barcelona as well as Chinese club Shangai Shenhuan where he may link up with his ex-Chelsea team-mate Nicolas Anelka.