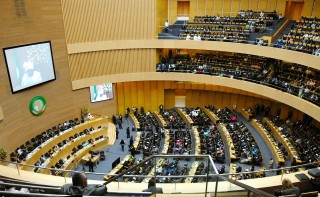 The African Union Summit was held at the headquarters of the African Union in Addis Ababa, from the 21st to the 31st of January, 2016. The 26th Ordinary Session of the Assembly of the Union with the theme “African Year of Human Rights with particular focus on the Rights of Women” saw African presidents come together to discuss and proffer solutions to various issues surrounding this theme in different countries on the continent. The UN Secretary General, Ban Ki Moon, was also present at the summit while the most notable absentee, perhaps, was Pierre Nkurunziza, the beleaguered president of Burundi. President Robert Mugabe also stepped down as AU chairperson and was replaced by General Idriss Déby Itno of Chad.

Though the AU summit was expected to address Burundi’s current crisis, it was unable to do so sufficiently. One of the resolutions of the UN’s security council meeting with Burundi last month was for members of the AU to “work behind the scenes” in convincing the country’s president to allow AU peace-keeping forces into his country. Though this approach was not expected to work, analysts hoped the AU would send in troops regardless. However, AU leaders at the summit have declared they won’t be sending troops to Burundi, but will, instead, be sending a delegation to try and negotiate for peace. However, analysts say this latest inaction by the AU could spur opposition members in Burundi to pick up arms against the government, a move which can de-escalate situations in the country into a full-blown civil war. On the rare occasion the UN has given Africa the chance to “solve African problems using African solutions”, we seem to be failing.

Another of its resolutions at the summit was the consideration of a mass-withdrawal by African countries from the Rome statute of the ICC, with South Africa possibly leading the charge. President Zuma of South Africa announced that South Africa was “reviewing its participation in the Rome statute and would announce its decision in due course”, a clear reference to the hullaballoo that followed its sheltering of ICC refugee, Omar Al Bashir, last year. On another part, President Uhuru Kenyatta claims the constant hounding of his government by the ICC has him “distracted from the duty to serve”, effectively placing the blame of his ineffective governance on the ICC. Prior to this, African leaders have made claims of persecution by the ICC, claims that seem to be justified considering the cases in the ICC are mostly about the continent. It appears as though they have finally had enough.

A literal change of the old guard?

Robert Mugabe handed over the post of the AU chairperson to Chadian president, General Idriss Déby Itno, at the conclusion of the summit. In his inauguration speech, Idriss Déby told the African leaders gathered at the summit, in fluent french, to “think African, act African, produce African, consume African…”

However, one of the highlights of the day was Mugabe’s speech where he questioned the UN Security Council and why they had not made any African country a permanent member. This is the same question he has been raising since he began his tenure last year but it is a strange comment to make, considering how he has excluded other groups from power in his own country for years.

The Ebola outbreak which has ravaged parts of West Africa for close to two years has been admirably contained. The AU summit recognised the efforts expended towards the eradication of the virus. At a luncheon to celebrate this, the AU gave awards to the volunteers, AU partners and private sector representatives who helped contain and end the Ebola outbreak. The AU also reiterated its promise to uphold the rights of Women in Africa.

Other issues discussed include the war on terrorism in Africa, with countries donating money to the formation of Military Joint Task Forces and preparations for an AU summit in Kigali later this year.