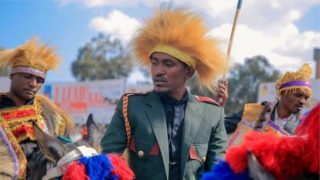 When the Addis Ababa Police Commissioner, Geta Argaw, broke the news of the assassination of Hachalu Hundessa, by unknown gunmen, a deadly protest erupted. The deceased was a famous musician and political activist who participated in the protest that saw the ousting of the former repressive regime.

According to a news report, the Commissioner said that Hundessa was shot in the capital’s Gelan Condominiums area late on Monday, June 29, 2020. Although the killer remains at large, he stated that several suspects were arrested.

Prime Minister, Abiy Ahmed expressed his condolences and assured the people of a comprehensive investigation. However, he urged people to keep themselves safe and avoid crime. Ethiopians in the diaspora also took to social media to express their shock.

On Thursday, July 2, his funeral ceremony was held in Ambo stadium, in Oromia. The event was attended by members of the military, with federal police and regional police fully on the ground to ensure peace. The service was also broadcast by Oromo Broadcasting Network, owned by the Oromia regional state.

At the funeral, his wife, Santu Demisew Diro, requested that a monument be “erected in his memory in Addis where his blood was spilt.” Hundessa was laid to rest at a church in his home town of Ambo.

The death of Hundessa was the death of the voice which embodied the struggles of the Oromo people “for equality and justice.” According to a report, Tsedale Lemma, editor-in-chief of the Addis Standard publication said that Hundessa “leaves behind a legacy of a man (who) is the institution of the consciousness of the Oromo people.”

He was a great influence on the Oromo people. In Lemma’s words, “When people were out on the street being shot at and being killed, he comforted the Oromo people with his songs of revolution, love and resistance to the system that really oppressed the people and led them to their streets.”

As of Sunday, July 5, 2020, the protest has claimed the lives of over 156 people in the Oromia region alone, a report indicates.

According to Jibril Mohammed, head of the Oromia Security and Peace Bureau, the Oromia region is the worst hit by the protests. He added that more deaths might be reported due to the number of injuries being treated in hospitals.

Hundessa was a leading political activist in Ethiopia who skillfully employed the use of music in his political activism. He was an Oromia, who was actively involved in the liberation of his people from the repressive past Tigray led government.

In the face of a repressive government, his music was effective in spurring his people to a continued protest. Perceived as one who embodied the struggle of the Oromo people for equality and justice, his songs provided a soundtrack for Oromo protesters.

2015 saw the start of incessant protests in Ethiopia’s two most populous regions – Oromia and Amhara. As indicated in a report, the people had gotten to their breaking point with the repressive Tigray-led government of  Prime Minister Hailemariam Desalegn.

While the Oromos make up about 36 percent of Ethiopia’s population, the Tigray ethnic group barely make up to 7 percent.

The report indicated that back in 2016, Ethiopia’s governing coalition was dominated by the party from the small Tigray region (TPLF), which had led the guerrilla war against the military regime of Colonel Mengistu Haile Mariam.

According to a United Nations’ Human Right Expert, David Kaye, the reform processes of the Abiy led government is both encouraging and fragile and deserves international support. Kaye noted widespread concern that hate speech in the broadcast, print and social media, posed a threat to the stability of the reform process.