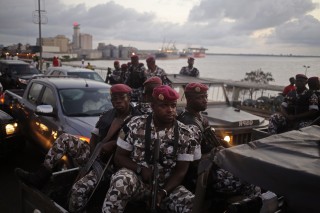 How the mutiny in Cote d’Ivoire escalated

On Friday, May 12th, 2017, what many observers feared after the January mutiny happened. The fall of cocoa prices, Cote d’Ivoire’s main revenue source, which deeply affected the country’s economy, led the government to reduce its budget by 9 percent last week.

The government had asked the mutineers to wait a bit for the rest of their payment while they were sorting out budgetary issues. The day before, a ceremony was organised at the presidential palace in Abidjan where some soldiers who supposedly were behind the mutiny in January apologised to President Alassane Ouattara and renounced the remaining 10,000 euros they were promised, implying that they understood the tense financial situation the country was facing.

Unfortunately, another set of these mutineers apparently didn’t agree to this and decided to express their disagreement by taking control of Bouake, the second city from which the mutiny arose in January. They also took control of the main military camps of Abidjan. The situation was therefore very tense on Friday as the government declared that, at this point, a negotiation was no longer possible, implying that they would resort to force if necessary in order to reestablish the order in the country.

The weekend was relatively calm even if the situation was still uncertain, observers suggested that negotiations were ongoing even if the government publicly announced the opposite and sent Special Forces and Presidential Security members unit to position themselves close to Bouake.

On Monday, May 15th, residents of Bouake and Abidjan woke up to heavy gunfire, forcing schools, public administrations and enterprises to close as precautionary measures. The day was rife with gunshots heard in various part of Abidjan; the northern and southern access roads to the city being controlled by the mutineers. Several people were wounded by flying bullets and a lifeless body was found close to the biggest university in Abidjan.

Rumours were travelling around that President Ouattara was out of the country, that the mutineers asked him to resign, that a military coup was underway, and that other big cities such as San Pedro or Korhogo were under the control of mutineers.

Around 7 pm local time, Cote d’Ivoire’s Minister of Defense announced on national television that an agreement was reached with the mutineers and encouraged them to go back to their camps. Even after that, gunfire was still being heard throughout Abidjan. It was also reported on France 24 that a spokesman for the mutineers announced that they rejected the agreement and that, at best, negotiation were still underway.

The situation is still very confusing as there are uncertainties about the what the outcome of this crisis will be. In fact, the greatest uncertainty now is how the government will get the country out of this crisis. Also, how will the government face the issue – after having accepted the demands of the mutineers, saying that they wouldn’t negotiate and then saying afterwards that an agreement was reached, which was shortly denied by these soldiers?

The integrity of President Ouattara and his administration took a big hit during this crisis, strongly affecting the peaceful image Cote d’Ivoire worked so hard to restore, especially when Abidjan is supposed to welcome the Francophone games in July. The next few days will quickly tell us how the situation will evolve.