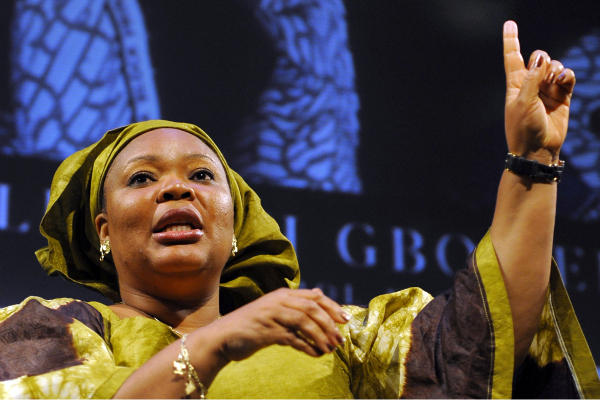 How sisterhood ended a war and changed a nation

I daresay that by the age of 40, not many women have seen as much trauma, distress and hurt as the Liberian peace activist, Leymah Gbowee. In her memoir, ‘Mighty Be Our Powers: How Sisterhood, Prayer and Sex Changed a Nation at War’, Leymah retells the 14-year Liberian civil war story through the eyes of a mother.

Born in central Liberia in 1972, Leymah Gbowee’s teenage years were disrupted when war broke out in 1989, lasting until 2003. The first civil war left over 200,000 dead, and like many political struggles in Africa, was the effect of attempted coup d’états and fraudulently elected leaders. Charles Taylor, a former government minister, invaded Liberia in 1989 to overthrow the Samuel Doe regime that had been forced on the Liberian people since 1980. The civil war lasted until a short-lived ceasefire was called in 1995. War broke out again but a peace agreement was reached in 1997 and Charles Taylor was elected as the President for Liberia. However, a second civil war soon followed from 1999 to 2003 with the re-emergence of rebel groups contesting for control of the country. In all, some 250,000 Liberians lost their lives due to wartime activities; many of these were children, shamelessly used as soldiers by Taylor’s government.

During the first war, Leymah fled on foot to Ghana, with an abusive partner and three young children. She eventually returned back to Liberia with her children having nearly starved in poverty in Accra. It was during this time that she joined the Trauma Healing and Reconciliation Programme (THRP) connected with the Christian faith in Liberia. She began to rehabilitate some of the former child soldiers used by Charles Taylor’s army through this programme. Leymah also made connections with West Africa Network for Peacebuilding (WANEP) leaders trained in the Eastern Mennonite University (EMU), a Christian university in the US specialising in peace-building and restorative justice.

In partnership with Nigerian lawyer and peace leader, Thelma Ekiyor, Leymah started Women in Peacebuilding Network (WIPNET), a women’s organisation focused solely on securing peace through the collective action of women across all ethnic and religious divides. It is this group of women that made history by securing peace and bringing an end to the 14-year civil war that nearly destroyed the country of Liberia.

Dressed in white and carrying placards, the women of WIPNET mobilised by Gbowee, held mass prayers and protested peacefully against Taylor’s government demanding an audience. Their fliers read: “We are tired! We are tired of our children being killed! We are tired of being raped! Women, wake up – you have a voice in the peace process!”  And for the women who could not read, simple drawings were made explaining their stance. With unusual protests such as the threatened “sex strike” against men, they were finally granted an audience in 2003. Leymah Gbowee represented the women before the president as the spokeswoman for the Women of Liberia Mass Action for Peace. Their efforts pressured Charles Taylor to engage in peace talks with rebels and other African leaders. But when the peace talks seemed more like a party and a peace agreement was unlikely to be reached, Leymah again led over two hundred women to camp outside the meeting hall until an agreement was signed on August 18, 2003. This marked the beginning of peace in Liberia, further solidified by the election of Africa’s First female president, Ellen Johnson Sirleaf, whom Gbowee endorsed for re-election in 2011.

The depth and impact of Leymah Gbowee’s story can hardly be captured in a few words. Detailing the dark days of depression and alcoholism she faced as a result of war trauma, constant separation from her family and now six children, Leymah’s memoir tells the story of a mother who made a difference despite hardship. At only 40 years, Leymah Gbowee has become a mother to not just her own children, but to thousands of ex-soldiers, women and children displaced and orphaned by the war. Through her continued efforts, Liberian women are empowered to play an active role in both the economy and politics of their state. By creating an atmosphere of peace for women to flourish, entrepreneurship in Liberian women is on the rise. According to Gbowee, “women need knowledge and awareness, political representation and economic empowerment to advance in African countries”  (Interview with Moiyattu Banya: I am Change Africa…). Such programmes as the Goldman Sachs’ 10,000 Women Initiative runs a free four-month programme teaching women about finance and accounting, preparing them to launch their own ventures.

Leymah Gbowee went on to complete a Master’s degree in Conflict Transformation and Peacebuilding in 2007 at EMU’s Centre for Justice and Peacebuilding. In doing so she overcame a long battle with poor self-image and low self-esteem. She was also called on to address international UN panels and write papers on the areas of peacebuilding and justice. With the support of Abigail Disney, feminist philanthropist and descendant of Walt Disney company founders, Gbowee started WIPSEN (Women in Peace and Security Network) an organisation fully owned and run by women, after the new head of WANEP would not grant WIPNET its autonomy.

Gbowee’s work through her women’s organisations continues to run in line with her firm belief in the power of African women:

“We found that in certain counties in Liberia the areas with the high rates of violence against women, and low graduation rates had communities where women were not as organized; the areas with very low rates of violence against women and high graduation rates women are very vocal and organized. This is important for us to advance as women” (Interview with Moiyattu Banya, I am Change Africa: Leymah Gbowee Interview).

Her work, supported by thousands of women, has brought her many accolades including 2007 Blue Ribbon for Peace from the John F. Kennedy School of Government at Havard University, 2011 Alumna of the Year, Eastern Mennonite University and the high honors of 2011 Nobel Peace Prize, jointly won with Ellen Johnson Sirleaf and Yemen’s Tawakkol Karman, another woman peace activist.