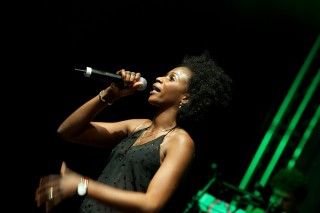 Fatou Mandiang Diatta, a Senegalese rapper, singer, and activist who goes by the stage name Sister Fa, is fighting back against the practice of female genital mutilation/cutting in Africa through her music. Her fight against the practice started with her writing about her own experience with mutilation. In 2011, she was awarded the Freedom to Create Main Prize for her projects in Senegal aimed at improving the situation of women and girls in general.

Sister Fa, who is currently based in Berlin, was herself a victim of female genital mutilation when she was about four or five years old, and she has never quite forgotten the horrors that came with the experience. According to her, she could never understand how an act that caused so much pain and suffering, and even death, for women and girls could be accepted and honoured anywhere as tradition.

With this notion, she began to spend time finding ways to address the issue of female genital mutilation, and the ignorance that surrounds it in Senegal, particularly from a misconceived religious perspective. In 2000, at the age of 18, she entered the music scene to tell her story and advocate for the education of people against the evils of mutilation, starting from her hometown.

In 2008, Fa toured Senegal in order to raise awareness for the cause. The tour included music, television, and radio shows, as well as speaking in communities. The same year, the WHO and nine of its UN partners issued a statement to advocate for the elimination of FGM/C. At the 2012 International Day of Zero Tolerance to Female Genital Mutilation, Fa spoke at the House of Commons in the UK in February. A month before that, she starred in Sarabah, a film based on her life of music and social activism.

FMG/C is prevalent in Africa, but it is equally widespread in the Middle East and Asia, as well practiced in other parts of the world, such as the UK, although in much lesser degrees (and mostly by immigrants). Female genital mutilation/cutting (FMG/C) is a practice that is painful for females, and causes them a number of short and long term health risks.

The World Health Organisation terms the practice of mutilation as a violation of the human rights of women and girls, which is also a form of discrimination against women. According to the WHO, about 125 million women worldwide that are alive today have been mutilated.

The response to this practice has mostly been in form of campaigns by national and international organisations that look to combat the act of mutilation, and eliminate all of its causes; social, religious, and otherwise. Although Fa refrains from using the term ‘mutilation’ herself, for personal reasons, activists have deemed it necessary to call it out as what it really is, as opposed to milder terms such as ‘cutting’ or ‘circumcision’ that do not aptly describe the procedure.

Sister Fa is positive that FMG/C can be eliminated in Africa with the right amount of support. Despite facing various challenges in her quest for social change in Senegal, Africa, and other parts of the world where the practice is still common, she remains focused.

The option for a reconstructive surgery exists for women who wish to correct the damage of mutilation, but equally of serious consideration is the psychological treatment that is usually more difficult to attain.