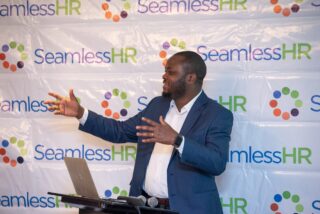 The African continent, home to more than 1 billion people, half of whom will be under 25 years old by 2050, is blessed with both natural and human resources, which have the potential to expedite its growth and eradicate poverty in the region. But, present socio-economic realities have shown this potential has not been maximized because these resources, in this context, the human resources have not been efficiently managed. Per the United Nations, as much as 60 per cent of the youth across Africa were unemployed as of 2017. This casts a shadow over the continent’s economic growth. The unemployment rate is high partly because there are no great companies to make people gainfully employed.

“One of the reasons why Africans are not building great companies is because there are no tools built in Africa and for Africa to help them become great. We have to build tools that solve our local problems so that companies can become bigger, more efficient and more successful. Human resource is the most important resource a company has, and we have an automated tool to help businesses with it,” Emmanuel Okeleji, CEO of SeamlessHR told Ventures Africa.

SeamlessHR, is a Nigerian-based company that wants to help African businesses “leverage the continent’s greatest asset – abundant human capital” with its cloud-based human resources (HR) and payroll software. The company helps businesses in emerging economies from hiring to retirement. Although the gospel is spreading across Africa, the journey began somewhere.

Okeleji has a background in medicine. He practised for a couple of years before embracing entrepreneurship fully. Before then, he worked briefly at Goldman Sachs – a leading global securities and investment management firm in London and then returned to work as a doctor at St. Nicholas Hospital, Lagos, Nigeria. He did not stay long in the field. However, he made an indelible impact by partnering with Ayo Shonibare and working with him as an assistant project director to birth the prominent world-class hospital now known as Evercare

In 2013, he contemplated furthering his medical career to become a kidney transplant surgeon or a cardiothoracic surgeon. Specialising in either would cost him about eight years of surgical training. “I had to decide whether to invest eight years to become a surgeon or pursue my entrepreneurial agenda,” Okeleji said. Propitiously, entrepreneurship prevailed, and Okeleji saw his last patient in March 2013.

The entrepreneurial goal for Okeleji was to build an enterprise that would be impact-driven and easy to scale. Building Insidify, a job aggregator platform, ticked the boxes for him as he was concerned about Africa’s rising unemployment.

In 2017, the team had an intensive strategy retreat, which led to the pivot from Insidify to SeamlessHR. Now the new face of Insidify, SeamlessHR’s titular service helps businesses manage their entire human resource processes and workflow. This entails recruitment, onboarding, HR information management, attendance leave, performance management, payroll, etcetera. Besides human resource management, SeamlessHR also wants to help businesses in emerging markets manage their non-human resources in line with its mission statement. The goal is to improve the entire business value chain in emerging markets. “Businesses need efficient tools to help them procure and manage assets. That is what we are building. And in the years ahead, you will see us rolling out these products,” Okeleji said.

Business software used by businesses until recently was usually on-premise. Improved internet connectivity, broadband penetration, and the 2020 pandemic are making the future of work increasingly remote and expediting the adoption of cloud computing software like that of SeamlessHR in Africa. Despite the radical shift, there are still businesses whose software is on-premise, and this poses a hurdle to their effective management.

SeamlessHR’s software is cloud-based and uses cutting-edge technology with the future of work in mind. “It is technology advancement that is pushing on-premise into obsoleteness. On-premise is the technology of the past, and cloud is that of the present and the future. In building SeamlessHR, we put this into consideration,” he stated.

Although the cloud HR and payroll space is new on the continent, it has well-known existing players like Cadana, Bento, etcetera. Despite the odds and competition, SeamlessHR has continued to thrive and describes itself as nulli secundus on some metrics. First, unlike its African counterparts, SeamlessHR is the only one focused on medium to large enterprises. “The software you can use to power an SME will not power a bank like Sterling. Software that will manage 20 staff can not work for 20,000 staff. Amazon is a massive company with millions of workers, and you can not effectively manage their performance on an Excel sheet. We can not build companies as big as Amazon or Walmart in Africa without excellent HR software,” Okeleji explained.

SeamlessHR is also end-to-end in that it focuses on the entire human resource management for business spanning recruitment management, onboarding, HR payroll, and retirement. The portfolio of customers SeamlessHR has worked with is outstanding and truly sets it apart from its competitors. It manages the human resource of companies like Sterling Bank, Wema Bank, Providus Bank, Titan Trust Bank, Lagos Business School, etcetera.

Notably, SeamlessHR has had the most funding in comparison with other players. In January, the company received $10 million in Series A funding, which Okeleji agreed has helped with growth and expansion. The company has been able to increase its team and plans to invest in embedded finance, BNPL and similar services on the payroll system. SeamlessHR is physically operational in Nigeria and Kenya, with plans to launch in South Africa before the year ends. However, it has customers in at least eight countries in Africa.

In refuting the possibly conceived notion that the automated HR platform could serve as a threat to in-person HRs, Okeleji contended that SeamlessHR is simply a tool built to power HR to do better. “It is like giving superpowers to HRs to do their work faster and efficiently. We are not taking jobs from HRs. We are only empowering them,” he argued.

Regarding the future of work in Africa, Okeleji foregrounds that there would be more outstanding companies and resilient institutions hiring more people. According to him, factors like modernisation and investment in the continent would broadly influence the future of work on the continent. The African tech ecosystem has shown impressive growth in the last decade, and many investors want to have a seed in this thriving ecosystem. According to Disrupt Africa, 564 tech startups raised more than $2 billion in 2021. It’s exciting to see that the record is on its way to being broken in 2022. As of March 1, 110 startups have raised over $1 billion, which is more than half (52.3 per cent) of the 2021 total.

With more funding, there is a trickle-down effect on the quality of human resources turned out, and African talents would have access to global education. Okeleji added that remote work would also be on the rise. He understands this is controversial as businesses have contested remote work is challenging and reduces productivity. However, he feels companies need to mature the processes and understand the tools, the system, and the procedures to improve remote work as it does not just work naturally.

Okeleji affirms that SeamlessHR’s growth has been encouraging, and the potential, enormous. The African economy is emerging and needs appropriate and efficient tools like what SeamlessHR offers to build far-reaching institutions. “We are a very ambitious company, building tools to help businesses hone their resources over the next few years. We are busying ourselves to build those tools focused tenaciously on Africa and expanding beyond its shores because it is equally important we ship this excellence to the world,” Okeleji stated.