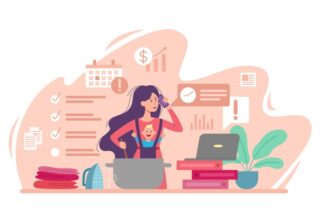 How Gertrude Umeh pivoted from teaching to selling tech products

My pivot Journal is a Ventures Africa weekly series documenting people’s career transitions from one industry to another, especially to tech.

Gertrude Umeh is a hardworking super-mum of three who lives and works in the bustling city of Lagos. After bagging a B.A (Hons) English Language and Literature from the Nnamdi Azikiwe University, Akwa, in 2015, she worked as a teacher for five years in Lagos. But in September 2021, she pivoted to tech to join the Business Development team at Risevest.

Gertrude always wanted to be a ‘Media Queen’. Thus, immediately after school, she began to apply to radio stations and media houses with high hopes of becoming a media personality. The panache, the eloquence and artistry with which presenters delivered their craft overwhelmingly mesmerised her daily. “Unfortunately, I didn’t get a call from the radio stations or media houses I applied to,” she said.

Then NYSC came in 2016. The government posted her to Holy Child College, Ikoyi, to teach. “I fell in love with teaching. I was a natural at the job and the students were drawn to me as much as I was to them,” she added. That wasn’t her first time in education. She once taught in a private school in Lagos during one of the many ASUU (Academic Staff Union of Universities) strikes she experienced as an undergraduate.

Education was a haven, so Gertrude decided to pitch her tent in education, upscaling her skills until a quest for investment opportunities pinned her focus on tech products. “Tech flirted with me real bad,” she said.

While searching for investment opportunities in the industry, “tech products started to draw my attention and even more, the solutions they proffered. I wanted to be a part of that. I wanted to push myself to do more,” she said. Shooting her shot, she sent a Twitter DM to the CEO of Risevest to be a part of his team.

Thankfully, he told her of some available roles in the company. “I jumped on it, applied and I’ve been a part of the Business Development Team for almost a year now,” she said.

Before her transition, Gertrude had not taken a course in tech yet but completed a study in Business Communications. Despite this, she was very curious about the industry and began to attend Twitter Spaces, followed anyone who had ‘tech’ on their bio and turned on post-notifications for people she admired in the space. From those conversations, “I learnt to start with an entry role in a tech company, take on tech courses to help me scale up, broaden my knowledge and solidify my expertise.” And that’s exactly what she did.

Gertrude’s tech career started with sales at Risesest, a digital dollar asset management platform that connects Nigerians to foreign investment. She worked as a B2C sales personnel where she moved from place to place selling products to consumers, alongside her colleagues. The journey isn’t as easy as it sounds for a pregnant woman. She was in her second trimester at the time. “There were times when I asked myself if I was doing the right thing,” Gertrude said. It was quite difficult to sell tech products but her new business communication skill made the journey easier.

“So far so good!” It’s been nine months now and she has scaled from B2C sales to B2B sales in the company.

As of the time of this writing, Gertrude has completed a scholarship programme on Brand Design with Ingressive for Good/Geneza School of Design. It was during her transition period and the days went by really fast. Time was no longer enough. “The hardest challenge I faced while taking that course last year was time. I had to apply discipline to meet up with course schedules and deadlines,” she recounted.

According to the ‘tech-mum,’ her career is at the stage where upskilling is vital. “I am presently taking a paid course in Data Analytics with Utiva alongside a leadership programme with the McKinsey Forward Africa,” she stated. Despite the arrival of her baby in February, Gertrude keeps pushing herself to become a formidable member of the Risevest team. “I want to ensure that Rise truly raises people according to its design.”

“Stay hungry for knowledge. Be a good sponge. Don’t be afraid to take that leap and always maintain that spirit of excellence.”