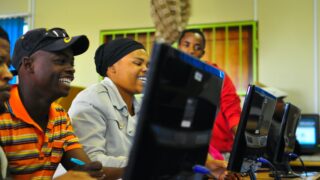 How far has 5G progressed in Africa?

The internet has gone far past the days of being termed a “young technology.” Today, it’s the foundation of a fast-growing digital world. Howbeit, its progress and impact in different regions are not the same, and Africa is one of those regions with a peculiar internet story.

With more people demanding faster internet and owning multiple devices that require internet access, the mobile industry has constantly needed to evolve. That’s why it has created 5G – the latest generation of wireless networking technology.

African governments are hopeful that one day they will be able to use 5G to do large-scale farming with drones, introduce self-driving cars on the roads, activate ‘smart’ homes and smart cities, and improve cybersecurity. Some analysts predict that 5G will boost Africa’s economy by $2.2 trillion by 2034. According to a projection by GSMA, 70 countries had 5G networks as of June this year. But this technology has only caught on in less than a handful of African countries.

Africa’s 5G pioneers are dealing with teething issues that can derail their 5G ambitions. The difficulties have revolved around the lack of clarity in spectrum regulation, commercial viability, deployment deadlines, and low citizen purchasing power of 5G enabled smartphones and expensive internet.

South Africa: The continent’s first 5G adopter deployed the technology on a temporary spectrum. But the pandemic caused networks to undergo heavy strains. Consequently, Vodacom, Rain, and MTN received orders to suspend using it in November 2021. However, in March, the country earned nearly $1 billion from a long-awaited 5G spectrum auction.

Lesotho: The Lesotho government granted Vodacom a temporary spectrum in 2018. That made Lesotho the second adopter of 5G in Africa. However, the journey has been anything but smooth since then. Vodacom, Econet and the regulator have been wrangling for so long that the country has not made any notable rollout.

Gabon: Gabon Telecom, which began testing the technology in November 2019, has yet to go commercial. Its CEO has set a target date of 2023.

Uganda: Uganda became the first East African country to test the feasibility of launching a 5G network in January 2020, working with ZTE and MTN. However, no commercial launch has happened to date.

Senegal: Senegal’s Sonatel and Orange have been conducting 5G trials in Dakar since November 2020. But the network is still largely inoperational.

Seychelles: Citizens received the country’s 5G launch in 2020 with mistrust, expressing concern over health hazards. However, one year later, citizens in six regions are getting faster speeds of 1.2Gbps from Cable and Wireless Seychelles for up to 100GB of use.

Kenya: Kenya has been testing the technology since last year. However, internet users will have to wait till the end of this year, when the country’s regulators should have issued 5G licenses to mobile operators. Analysts expect the nation to account for more than half of Africa’s handful of 5G mobile subscriptions in 2026.

Egypt: Orange received spectrum from the Egyptian government in February last year, allowing it to test 5G networks alongside Vodafone Egypt, Egypt Telecom, and Etisalat Egypt. Even though this development is promising, Egyptians still have to wait a bit longer for 5G.

Zimbabwe: On February 24, Zimbabwe’s Econet announced that it had launched the country’s first 5G network and would activate two dozen sites by this month.

Botswana: On February 25, Botswana’s Mascom unveiled 5G to residents of the capital Gaborone. It started with four sites in the city, with a plan to lay more than 100 base stations by the end of 2022.

Reality check: How ready is Africa?

After MTN launched a commercial 5G rollout in Nigeria, debates on its growth prospects sprung up. The argument bordered on the fact that internet adoption has been slower than expected.

Africa has the lowest number of internet connections. And not even the country with Africa’s top mobile internet speed is close to the global average. Data from the 2022 Speedtest Global Index shows that South Africa, the continent’s internet speed leader, ranks 46th globally with an average mobile internet download speed of 68.9 megabits per second (Mbps). That’s much less than the global average mobile download speed of 77.7 Mbps. A survey by Ookla also showed that in the second quarter of 2022, median download speeds were as low as 2.89 Mbps in Guinea.

3G still dominates Africa’s internet, as 4G adoption is currently below a fifth of total connections, according to GSMA. That’s because smartphone penetration is not high enough. Safaricom, Kenya’s leading telecom provider, once admitted that the high cost of 5G-enabled smartphones is slowing down its ambition to offer mobile 5G services.

5G-enabled smartphones aren’t affordable enough for many Africans, as their middle class is small and wealth is poorly distributed. One study in Kenya revealed that 94% of the population owns devices costing less than $200. Meanwhile, the cheapest 5G-supporting phones cost up to $300. Beyond building the infrastructure to support 5G, Africa needs economies that support innovation.