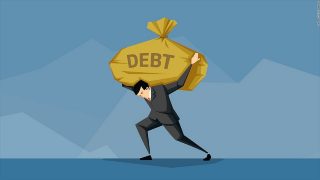 How does your country’s debt affect you?

We might be on the brink of the greatest debt crisis in history. But not many seem to understand how national debt impacts their everyday lives. The effects of national debt trickle down from governments to institutions and the people at large. Failure to meet debt service obligations has devastating impacts, including the downgrading of credit ratings (and, hence, future higher costs), heightened pressure on foreign exchange reserves and domestic currency depreciation, and the real possibility of being rationed out of the market—and negative reputational consequences. It’s also bad for investor confidence. For the masses, it pans out as heavy inflation, difficulty in getting loans from banks, and an overall decline in trust. When trust in the system becomes low, it also affects how much citizens invest in their country. An example is how many young Nigerians do not want to participate in their local stock exchange but prefer to buy U.S. stocks. Here are a few real-life instances where sovereign debt affected the masses:

Following the fallout of the global recession of 2008, several Eurozone member states couldn’t refinance or repay their national debts. These countries included Greece, Portugal, Ireland, Cyprus, and Spain. As the Eurozone is a currency union without a fiscal union—that is, one currency with different taxation and public spending rules—it was difficult for the European Central Bank and the various member nations to properly respond. To this day, the crisis continues, with many affected nations subject to adverse labour market conditions. Several Eastern and Southern European nations are now facing negative population growth as a result.

Venezuela made most of its wealth from oil. However, when oil prices dropped, it immediately affected Venezuela’s revenue. By 2017, Venezuela had a nearly 90 per cent poverty rate. This led to the exit of foreign investors and multinationals from the nation, such as Ford and General Motors, while American Airlines and United Airlines suspended ticket sales.

Greece’s financial woes did not come as a surprise. After borrowing to fund the 2004 Athens Summer Olympics and increasing public sector employee wages, the tourism-driven economy came under immense pressure. The 2008 global recession forced Greece into austerity, with the nation’s position in the Eurozone making it difficult to reposition the national monetary policy. This led to a 2012 debt restructuring, a complete upending of the Greek political system, high unemployment numbers, and a declining population with most Greeks of childbearing age relocating outside the nation to find jobs.

The third-largest economy in the Caribbean became grossly indebted, with the debt roughly amounting to 100 per cent of the nation’s GDP in 2019 despite extreme government austerity. In 2010, the situation was much worse, with the debt-to-GDP ratio being around 140 per cent. This meant that 65 cents of every dollar the government took in went to interest payments, leaving the nation in default and forced to engage in a debt exchange.

The African island nation of Seychelles may have been pushed into default by the global recession, but it found its way to the edge through decades of questionable economic decisions. To improve living standards in the 1970s, the nation engaged in a socialism-inspired scheme that succeeded in its goals, but undermined productivity. With foreign investors being offered large tax concessions, the government was forced to borrow to meet spending expectations.

The International Monetary Fund bailed the nation out in 2009 while forcing changes in its monetary and taxation structure. Much of the economy today, however, is still controlled by state-owned entities. It’s important for citizens to hold their leaders accountable for public debt, as these decisions affect them in the long run.