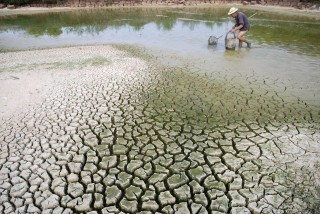 “This is the first paper to link climate shock to an HIV epidemic since antiretroviral drugs became more widely available in sub-Saharan Africa. We should view this as another kind of warning that climate change will affect us in unexpected and unwelcome ways.” – Jessica Justman, MD, senior technical director, ICAP.

According to UNAIDS, an estimated 1.8 million individuals worldwide became newly infected with HIV in 2017. In the same year, 940000 people died of HIV-related illnesses worldwide. While this may seem like a huge figure, it is actually an improvement from 34.2 million infections and 1.7 million deaths in 2011; indicating a level of success in the fight against HIV/AIDS in the last decade.

Thanks to affordable antiretroviral treatments, infection rates are slowing down and infected people are living longer, healthier, and more productive lives. But the climate change may be threatening this progress. A recent study shows an interaction between drought and the proliferation of HIV infection. Researchers at ICAP, a global health organization based at  Columbia University’s Mailman School of Public Health have linked droughts in Lesotho, South Africa to an almost five-fold increase in the number of teenage girls involved in sex trade as they are more likely to drop out of school, start having sex earlier and contract HIV.

The interaction between climate change and HIV is simply a cause and effect principle. Climate change causes drought, which consequently leads to food scarcity, migration, and poverty. People faced with food scarcity are likely to migrate in search of arable land to grow food. They are also likely to become refugees, displaced from their homes, without the support of friends and family. Such people may tend to engage in high-risk sex, acquire HIV or discontinue HIV treatments.

In 2014 through 2015 and 2016, Southern Africa experienced a severe drought that resulted in food shortages and higher food prices affecting almost 40 million people in the region; all of Lesotho was affected. The region is also home to the world’s largest HIV epidemic. In Lesotho, one in four adults is living with HIV.

“The impact of climate change on human health is becoming increasingly evident. Climate extremes are often associated with changes in behavior as people struggle to survive in the face of loss of agricultural production,” the study states. “As people, particularly women, address their food insecurity, they may be less likely to take steps to protect themselves from HIV infection. There is also concern that food insecurity could lead to decreased access to antiretrovirals (ARVs) because of economic constraints or decreased adherence or absorption of ARVs.”

Andrea Low, an assistant professor of epidemiology, and lead author of the study told Reuters, “I think the real concern is that we have gained a lot in terms of epidemic control … but there is always a possibility to lose all those gains if a lot of people are displaced due to climate extremes (and) forced migration.”

In light of the anticipated acceleration of climatic extremes – rising sea levels and extreme droughts, the researcher at ICAP has called on governments and policymakers to implement strategic interventions by providing adequate resources. This includes cash transfers to encourage families to keep children in school and avoid early marriage, improved access to medical care, distribution of HIV self-testing kits, and expanded programs for adolescent girls, young women, sex workers, and migrants.

“We really need to think about the population in the long term. If that’s reduced every time there’s some kind of climate extreme and they have to pull their kids out of school, that is going to have really detrimental effects – not just on HIV but on all aspects of society,” Low told Reuters.

The researchers also called for more investigations on how to improve the resilience of crops to drought in order to mitigate the severity of the impact on household incomes and public health.