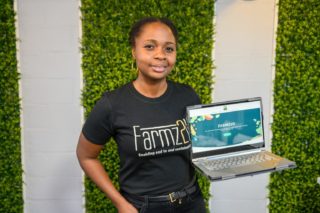 How Aisha Raheem’s startup, Farmz2u, is empowering the next generation of sub-Saharan African farmers with data

According to the World Bank, Nigeria ranked 96 out of 113 on the Global Food Security Index in 2018, with nearly 25 million people undernourished. With the current population of 211.4 million expected to grow to around 403.31 million by the end of 2050, Nigeria has the largest population in Africa and is the seventh most populous country in the world. According to the United Nations, if current trends continue, Nigeria’s population will exceed 728 million by 2100. Nigeria will then overtake China and India to become the third most populous country in the world.

In addition, at 4.2 per cent in 2018, Nigeria’s urbanization rate remains among the highest in the world. The percentage of urban dwellers is expected to rise to around 70 per cent by 2050, or 280 million people. These are clear indicators that food security will deteriorate unless significant steps are taken to transform Nigeria’s food system to make it more efficient and inclusive to ensure food and nutrition security.

Although the concept for Farmz2u was conceived much earlier, Raheem launched the platform in 2019 following an experience that made her aware of the challenges in the food industry, which included not only poor food quality but also a high level of waste. “After being exposed to those challenges, I became motivated to address poor farming practices directly on the farm,” she said.

Speaking of the importance of data, Raheem stated that it is critical to take note of data from previous farming cycles in terms of what worked and what didn’t work to optimize the next harvest cycle. “It is critical to have data on market activities and to be able to communicate more effectively across the various levels of the farming process and the broader agro-business process to increase efficiency and profitability. The market is highly fragmented, and what Farmz2u is attempting to do is create structured data,” she said.

The company’s initial funding came from founders and innovators, but subsequent funding came from grants. Last year, Farmz2u received $50,000 from the Lagos State Science and Research Innovation Commission (LASRIC) and the UK’s Department for Business, Energy, and Industrial Strategy (BEIS).

Accessing information such as “what to grow, how to grow, where to sell produce, or even get a loan to start farming” can be difficult for existing and aspiring farmers. Farmz2u answer these questions on its Farming Management Platform (FMP) and Farming Vendor Platform (FVP). The FMP, recognized as a promising practice by the United Nations Food and Agriculture Organization, is a proprietary product that provides digital extension services while allowing farmers to apply for microfinance loans, buy seeds and fertilizers, and rent tractors for their farms.

Farming Vendor Platforms avoid non-value-adding middlemen in the supply chain by directly connecting with end-buyers. FVP makes it easy for vendors of farm and food products to sell their produce through an online store that automates pricing and delivery. We are currently looking at retail consumers to integrate them into our trading activities with o on the FVP.

Farmers can use Farmz2u’s digital extension services for free, but additional services such as applying for loans, purchasing seeds and fertilizer, and selling produce to a buyer incur a flat rate fee and transaction commission. “However, that commission is charged to the service provider, not to the farmer,” Raheem said. “For example, if a farmer applies for a loan, they are charged a flat-rate fee of N1000 to cover administrative fees, and that is all they are required to pay. Then we charge the microfinance institution whatever percentage in delivering the loan and commission on the loan value,” she explains.

As a web-based platform, poor internet gets in the way of their service. This is exacerbated when users/farmers travel to rural or remote areas where most farms are located. To solve this problem, Farmz2u is working to reduce reliance on internet connectivity by creating downloadable content that farmers can download and access later without the internet. Other challenges include logistics issues related to Nigeria’s poor infrastructure, like having goods deteriorate as a result of bad roads.

Being a finalist in competitions such as the African Prize for Engineering Innovation and UNDP’s agro-tech initiative has increased the company’s visibility, helped build commercial opportunities, and supported its growth strategy of empowering farmers across Sub-Saharan Africa. Through UNDP’s programme – Cultivate, Farmz2u expanded into Kenya and now has over a thousand farmers there. While Nigeria is regarded as Farmz2u’s West African hub, Kenya is its East African hub.

Farmz2u received a social return on investment score of 49 out of a possible 90 in an independent study conducted by One Young World, a UK organization that drives action by funding social impact initiatives. By validating their social impact, the company was able to assist farmers in increasing average crop yield in some target produce sales such as rice and maize by 20 per cent, a 38 per cent decrease in farm waste, and a $100 annual increase in farming income by 2020.

Raheem believes that, while the government has implemented many policies and programs to revitalize the country’s agricultural sector, such as the Anchor Borrower’s Scheme, much more needs to be done to rid the system of problems such as lack of transparency, corruption, etcetera. With Farmz2u, she hopes to empower the next generation of sub-Saharan African farmers and encourage youthful participation in farming activities. And with a solid presence in Nigeria and Kenya, she believes the company is on its way to meeting that target.

“Our target farmer is aged 18 to 30. This is not to say that if you are older, we will deny you access to our platform; rather, it is the type of age we have in mind when developing a solution that is digitally savvy and can provide job opportunities for young people in agriculture, and we seek to achieve this provision through our mission to boost data-centric products that increase productivity,” she concluded.