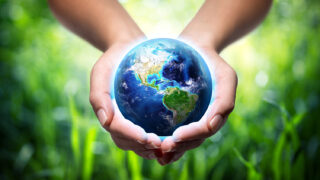 The earth is ours to plough, not to waste. Ours to man not to maim – Niyi Osundare.

Yesterday, nations across the globe celebrated World Environment Day to raise awareness about degrading environmental conditions and encourage people to take positive environmental actions globally to help create a better future. The theme for this year was ‘Only One Earth,’ and one key reason for this is because the earth is heating up rapidly. Human activities like tree felling and the burning of fossil fuels are causal effects.

The warmer the earth becomes, the higher the threat to the existence of life in it. If warming reaches about two degrees Celsius, the ecosystem will collapse, and a third of all life on earth will face extinction. Earth is close to surpassing the 1.5 degrees Celsius threshold, and it may likely be sooner than expected. The effects of climate change are evident in rising sea levels, increased heat, drought, insect outbreaks, loss of wildlife species, erratic rainfall patterns, etcetera.

The estimated cost of adapting to these odds continues to rise and could reach US$280-500 billion per year by 2050 for developing countries alone. It is also interesting to know that, although developing countries do not contribute significantly to climate change, they bear the most brunt because of the deficit in adaptation infrastructure. However, Africans can not fold their hands and act unconcerned. All hands must be on deck to save the earth. Across Africa, countries observed World Environment Day differently, and here are the highlights.

Nigeria is ranked the 53rd most-vulnerable country to climate change globally. Extreme weather patterns are exacerbating challenges confronting communities. The growing tussle over food supply is driving resource conflicts across Nigeria, and we have seen this with the rise of the farmers-herders clash. In commemoration of World Environment Day, the government took climate-sensitive moves. Yesterday, the federal government reiterated its commitment to ensure that the Climate Change Act and other environmental policies are enforced. Last year, the country committed to achieving net-zero by 2060 during the COP26 summit.

Lagos State, the commercial hub of Nigeria, expressed commitment to promote earth-friendly policies geared towards the delivery of a healthy 21st-century economy and called on residents to adopt a sustainable attitude to engender a livable built environment. About five hundred trees were planted in Plateau, and the Anambra state government committed to planting more than one million trees to promote afforestation.

To commemorate WED, the minister of Environment Science, Technology and Innovation in the country, Mr Kwaku Afriye, called on the reorientation of the use and disposal of plastic to minimise the present pollution problem experienced in the country. Plastic pollution is one of the major environmental problems the country battles. Plastic wastes are a major cause of flooding in Accra and other major cities around the country. To build a resilient infrastructure to mitigate the consequences of climate change, Ghana requires at least $1.3 billion to implement its roadmap for climate adaptation. Failure to take action would cost the economy $13 billion.

Per the report, a number of organisations mounted exhibition stands to showcase products made from recycled plastic. These recycled products include roofing sheets, tiles, lorry tires, and other construction materials.

Kenya has large, diverse ecological zones and habitats, including lowland and mountain forests; coastal and marine ecosystems. Wetlands contribute significantly to Kenya’s economy in terms of agriculture. But Kenya’s biodiversity strength is declining due to improper implementation of conservation and restoration laws.

Kenya also bears a fraction of the global burden of climate change. In 2011 drought in Kenya caused damage estimated at $11bn, while another in 2014-18 left 3.4 million people in food insecurity and half a million lacking access to water. In 2018, floods displaced 230,000 people in Kenya, including 150,000 children, drowned 20,000 livestock and led to the closure of 700 schools.

While commemorating WED, Kenyan environmental activists called on governments to ensure a balance between tackling climate change and meeting the needs of biodiversity conservation and restoration. The activists maintained that there is a need to strike a delicate balance between use and replenishing; nature and food systems, restoration of ecological balances, and transforming consumption, production, infrastructure, investment and land use for just climate action.

Also, major African media companies teamed up with China Media Group (CMG) in Kenya to roll out a joint initiative in environmental protection. Representatives from African media weighed in on their role as broadcasters and publishers to create environmental awareness among the public. They called for more exchange programmes between Chinese and African media to strengthen environmental reporting with technological advances.

Almost two months ago, climate change triggered one of South Africa’s deadliest flooding disasters. More than 400 people died from the floods, and more than 12,000 houses were destroyed, forcing an estimated 40,000 people from their homes. South Africa saw WED as a day to further create awareness of the devastating impact climate-induced environmental crises have on humanity and its (South Africa’s) economy.