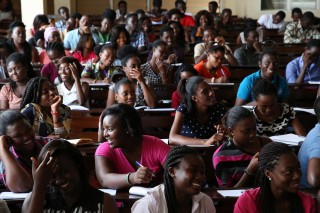 More than two million young Africans across 37 countries were engaged with digital and coding skills at the Africa Code Week (ACW) 2018. This exceeded all expectations when compared to 1.3 million youth that participated in the previous edition.

From an initial focus of introducing coding skills to African youth and raising awareness of the importance of digital education, ACW key partners focused and augmented efforts in 2018 to sustain the impact of the programme through capacity-building with governments, schools and NPOs. As a result, close to 23,000 teachers were trained on the ACW digital learning curriculum in the run-up to October 2018 events.

The resounding success of Africa Code Week is an unveiling of what the young generation actually needs and rightfully expects, Cathy Smith, Managing Director of SAP Africa said, adding that “young people in Africa don’t just need opportunities: they need to know how to take the first steps to get there. They need role models and guidance.”

Morocco, which has been leveraging Africa Code Week to accelerate nationwide ICT capacity building since its inception, stood out at the latest edition with a record of 5,208 teachers trained throughout the year 2018. It is followed by Tunisia and Nigeria, with 2,800 and 2,553 teachers respectively.

Africa is way behind in terms of advanced technology, having missed the opportunities of previous industrial revolutions. To bridge this gap with the rest of the world, among other things, there is a need to empower the young generation with necessary digital skills. The continent cannot afford to miss the possibilities of the fourth industrial revolution largely characterized by a fusion of technologies that is blurring the lines between the physical and digital spheres.

“There is only one way to bring the promises of the Fourth Industrial Revolution to the young generation: through a reference point, and that reference point is the teacher,” says Davide Storti, YouthMobile Initiative Coordinator at UNESCO’s Knowledge Societies Division. “We look forward to furthering dialogue with governments, so we can translate the powerful partnerships and networking built by and around Africa Code Week into long-term programmes that sustain the excitement around 21st-century learning.”

According to Alexandra van der Ploeg, Head of Global Corporate Social Responsibility at SAP, fostering powerful partnerships with a sharp focus on capacity building is one of Africa Code Week’s strengths.“This fourth edition saw unprecedented collaboration from our public and private sector stakeholders, as well as from NGOs, to train more teachers and reach more young people than ever before,” she said.

Africa Code Week is an initiative that involves hundreds of schools, teachers, governments, and nonprofits getting together to bridge the digital and gender skills gap in Africa. The goal of Africa Code Week is to empower the young generation by teaching the coding skills they need in order to thrive in the 21st century.

Launched in 2015 by SAP’s Corporate Social Responsibility EMEA department, ACW is an award-winning initiative taking place every year in the month of October. It is now actively supported by key partners UNESCO YouthMobile, Google, the German Federal Ministry for Economic Cooperation and Development (BMZ), the Cape Town Science Centre, the Camden Education Trust, 28 African governments, over 130 implementing partners and 120 ambassadors across the continent.