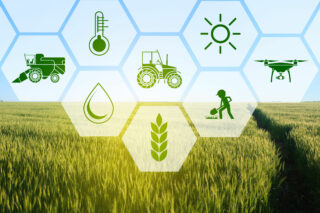 Technology is progressively disrupting the agriculture sector – a foothold in the economies of many African countries. Remarkably, Africa is evolving from a drudgery-driven mode of agriculture to a technologically inclined one. Farmers now use drones on farms for aerial intelligence, and crops are now grown without soil. Without a doubt, the massive space needs more technological innovation. Earlier this year, we wrote about how blockchain can help transform agriculture in Africa, using the beef export market in Zimbabwe as a case study. Ventures Africa then held a Twitter space to discuss its unexplored potential with industry experts.

Blockchain is an interesting disruptive technology.

Although it first gained attention via cryptocurrencies, blockchain has use cases in different sectors. This disruptive feature is what excites Reginald Alango, operations manager at Cellulant. “We can see how it is opening new doors anybody can access. Another interesting thing is how it disrupts every industry, and that is why we are speaking about it in agriculture,” he stated.

For Bolaji Akinboro, Co-founder of ToroNet Chain, blockchain is a great force of transformation in agriculture as it will help organise the sector. According to the Food and Agriculture Organisation of the United Nations (FAO), post-harvest food losses in sub-Saharan Africa are worth $4 billion per year. The reason is not far fetched. The agricultural sector in Africa still struggles with supply chain inefficiencies and a heavily fragmented market. Since the market is disorderly, agricultural produce passes through many brokers and takes a long period from the smallholder farmer to the end-market buyer. In addition, the continent still lacks access to ample cold storage facilities, so the prolonged supply chain results in the wastage of some products, especially perishable ones.

Last year, Africa had the fastest cryptocurrency adoption rate. Although cryptocurrencies, which operate on blockchain networks, have widespread use on the continent, businesses have not yet taken full advantage of blockchain. Blockchain is facing adoption and implementation challenges.

To Akinboro, adoption is closely related to use cases and to expedite it, it must solve real unifying problems facing people. Having worked with the Federal Government of Nigeria to run its e-wallet programme for 8 million farmers who received subsidies as e-vouchers, he argued that the process would have been more efficient and seamless if blockchain technology were available. With it, farmers would have gotten deposits in the form of tokens. “We need to deploy technology against these cases that affect people, and adoption will follow,” he stated.

There are some significant barriers to industry operators adopting new technologies like blockchain. We once explored the limitations to the adoption of agritech solutions in Africa. And some of the hurdles identified were technological illiteracy, lack of access to energy, the internet, and the high cost of agritech products and services. Akinboro shares the same sentiment. He explained that most technology projects at inception often have a high cost of deployment, and quite many farmers do not have the balance sheet to support it. Alango also adds that mobile internet connectivity and rural internet penetration pose a challenge for adoption. As of 2020, internet penetration was at 43 per cent, meaning about six out of 10 Africans were not using the web.

The government in Nigeria and many other African countries are still very hostile to cryptocurrency and its accompanying technologies. This has primarily curbed the interest of investors on the continent in this regard. However, in places where investors’ flights still have a landing space, Jehiel Oliver, CEO of Hello Tractor, identified the network effect as a vital component of a marketplace. “Hello Tractor runs a marketplace of smallholder farmers who book tractor services through community-based agents who use our apps to organise the farmers on their behalf. And those bookings go to tractor owners who use our technology to manage their fleet. The most important component of building a marketplace is building out network effects,” he said.

Since the technology is relatively nascent, he advises investors to subsidise the early days of growth to stimulate interest in the market. “You can do an old school approach, like Paypal, by paying people to use your product. Also, tokens could serve as a reward to early participants in the marketplace. This applies to any marketplace, including agriculture which in Africa is the biggest marketplace representing 40 per cent of our GDP and employing 60 per cent of our labour force,” he notes.

The government has a role to play.

The government has so much influence in accelerating technological adoption on the continent. They provide the necessary framework, policy, and the needed infrastructure for the rollout of such technology. On this note, the African government is not doing enough. Akinboro thinks the government needs to stop being a mere imitator. For him, the governments need to understand how good blockchain technology is to Africa. “For example, there is a lawsuit between the SEC and ripple in America on if the token called XRP is a security or not. Some African governments blindly classify tokens as securities, which beats my imagination. They need to learn the rightly from the global north and look for ways our continent can become a hotbed for innovation,” he argues.

Christopher Light, CEO of E-Livestock Global LLC, pointed out that the government needs brilliant investor protection policies. That is policies that will not stifle innovation and real investment opportunities or scare investors.

While it is evident technology is disrupting the agricultural sector in Africa, some areas need an immersive impact. As cardinal as agriculture is to Africa, it lacks access to finance and investment. The industry is projected to be a $1 trillion industry by 2030 but receives less than three per cent of banking credit. The reason is that Agriculture has never been an attractive business because of the numerous risk attached. To drive financing to the industry, it has to be de-risked. Because the issue of finance has changed and there is now talk about decentralised finance, Alango suggests the use of de-fi loans that have perfect interest rates. “You have to build a peer-to-peer system, which can create and use interest rates based on real things. So when you collect data on their mobile phone and look at the trend of how he uses the data. You can use an analytic feature that can predict if a farmer has the likelihood of paying back a loan,” he explained.

Planted crops can also have a futures contract, which is a legal document to buy or sell a particular commodity, asset, or foreign security at a predetermined price and at a specified time in the future. It is used to secure a loan and act as collateral, and farmers can get the loans as a token in their smart wallets.

The role of youths in blockchain adoption

The notion of the traditional drudgery mode of agriculture has always scared off youths from taking up a career in farming. But with the recent infusion of technology into agriculture, there is a renewed interest in them. A significant number of smallholder farmers are aged or ageing, and youths should be in the line of succession to ensure agricultural productivity on the continent. With their digital savvy nature, technological adoption from their end would be faster. “Adaptation is key, and we need to bring a younger generation of future farmers into the ecosystem that would help develop the agriculture sector in Nigeria and Africa,” stated Akin Alabi, co-founder of Corporate Farmers International.