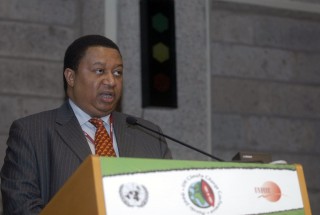 According to media reports, a Nigerian oil technocrat and former head of the Nigerian National Petroleum Corporation (NNPC), Mohammed Sanusi Barkindo, is a front runner in the race to become the next secretary general of the Organisation of Petroleum Exporting Countries (OPEC). This is due to rising tensions between OPEC leaders in Saudi Arabia, Iran and Iraq which has prevented members from choosing candidates proposed by those countries.

Although it is uncertain whether Barkindo will win, sources familiar with the organisation think he has greater chances of securing the job, considering his years of experience and knowledge in the industry.

If elected, he will replace Libya’s Abdalla Salem el-Badri who has been OPEC’s Secretary-General for over nine years. El-Badri was supposed to leave at the end of 2012, but his tenure was extended due to the fact that member countries of the organisation were unable to reach a consensus on his replacement.

According to reports, OPEC delegates hd previously mentioned that Nigeria or Angola are the most likely countries to produce the cartel’s leader because they are neutral in the group’s geopolitical disagreements. It is worthy to note that the secretary general is not a decision maker at OPEC. Just like el-Badri, his key role will be brokering agreements and bridging differences between OPEC’s fractious members on production policies.

What you didn’t know about Mohammed Sanusi Barkindo

Barkindo started his career as a member of the Nigerian delegation to OPEC in 1986 when the late Dr. Rilwanu Lukman was Minister of Petroleum Resources (People called him Rilwanu Lukman’s right-hand man).

He was the National Representative for OPEC between 1993 and 2008.

Barkindo was the Deputy Managing Director of the Nigerian Liquefied Natural Gas (NLNG), a joint venture between NNPC, Shell Gas BV, Total and Eni between 1993 and 2008.

He served as the acting Secretary General of OPEC in 2006 after Edmund Dakouru.

Barkindo was the Group Managing Director of the Nigerian National Petroleum Corporation from 2009 to 2010.

The world awaits the consensus of the meeting between OPEC oil ministers scheduled to take place in Vienna on Thursday.