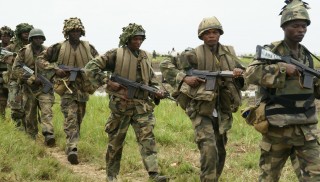 Here is why the proposed ‘Operation Rescue Final’ is relevant

On Wednesday, the Nigerian Army revealed its plan to launch a new operation codenamed ‘Operation Rescue Final’. The Chief of Army Staff, Lt General Tukur Burutai gave this hint at the Army Headquarters in Abuja when the House of Representative on Army paid him an oversight visit.

The operation is aimed at rescuing all abducted persons across the federation. Its main objective to free all Boko Haram abductees and other kidnapped persons.

Burutai said that “Once we start (the operation), we will not relent until everybody abducted is rescued.”

Why is this operation relevant?

The Nigerian Army is saddled with the responsibility of protecting the lives and properties of the citizens. In a bid to achieve this, several operations have been launched the military. Some of them are Operation Lafia Dole, Operation Crocodile Smile, Operation Pulo Shield, Operation Safe Corridor, and Operation Crackdown, among others.

There are lots of complaints about the government’s attitude towards rescuing the over 200 abducted Chibok girls. This operation will indicate the willingness of the government to rescue the girls and other abducted persons. While the present administration is not to blame for their abduction, it still has the responsibility of rescuing the girls.

To serve as a reminder, the parents and families of these abducted children grief over them on daily basis. This grief intensifies whenever the Jihadist group displays the video footage of these girls on the internet. Thus, launching an operation to rescue these girls and other abducted persons across the country is long overdue.

It is significant to state that this operation, if properly executed, will be a giant stride towards removing fear among the populace. This is because retrieving the abducted girls from the shackles of the terrorist or kidnappers will make people have a sense of security. For instance, the military exercise against the Boko Haram members in the northeastern Nigeria makes the members of the community feel safe. This could be seen as they are returning to their various communities after fleeing for years.