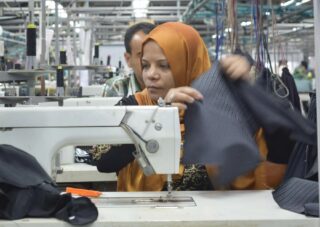 Here is what IMF loan and currency devaluation is costing Egypt

The year 2023 began with production cuts and job losses for the Egyptian market as businesses reduced output and cut down on employment due to poor sales caused by high inflation rates. The recent Egyptian Purchasing Managers’ Index (PMI), compiled by S&P Global Market Intelligence, revealed that output and new business fall at sharp but softer rates alongside job cuts and a decrease in stock levels.

The report indicates a reduction in economic activities triggered by a decline in buying power. “Lower activity typically reflects weak demand conditions, as a hike in the prices of goods and services reduced buyers’ purchasing power,” the report indicates. The reduction occurred because of rapid inflation that persistently hindered the Egyptian non-oil sector at the end of 2022.

In December, the International Monetary Fund (IMF) Executive Board approved a 46-month $3 billion arrangement under the Extended Fund Facility (EFF) for Egypt. This is to help meet the balance of payments needed and to support the national budget. The condition required for it to access the loan was a currency devaluation. Thus, Egypt devalued its currency twice last year to access loans from the multilateral lender. It aimed to buffer the economy already impacted by the Russian-Ukraine war. But that, in turn, triggered high inflation rates.

Last month, Trading Economics reported Egypt’s inflation rate to hit near a 5-year high. Its annual urban inflation rate accelerated to 18.7% in November of 2022, from 16.2% in the previous month. “It was the highest reading since December 2017, sending inflation above the upper limit of the central bank’s 5-9% target range for the ninth straight month, largely due to the ongoing depreciation of the pound,” the report noted. The chart below shows Egypt’s inflation in 2022:

The positives and negatives of currency devaluation

The concept of devaluation has its positives and negatives. When a country whose currency is weak against the dollar has an active manufacturing sector, it becomes more competitive globally. That is because people want to trade where it is cheaper.

A typical example is the Chinese economy. The most industrialised economy globally. For such an economy, currency devaluation sets it at an advantage in the export market.

In 2013, China became the largest trading nation in the world- a position previously held by the United States of America. Later in 2016, former U.S. president, Donald Trump accused Beijing of gaining an unfair advantage over American companies by devaluing its currency and issuing heavy taxes on U.S. products in the Chinese market. Five years later, Beijing’s export amounted to nearly $3.36 trillion from the $2.65 trillion recorded in 2020.

A devalued Egyptian pound. What is at stake?

Raising a loan to cushion the economic shocks imposed by the Russian-Ukraine war on Egypt’s economy is not a bad idea. However, devaluing the currency to get the loan puts the country in a fix. Unlike China, Egypt imports more than it exports. The Arab nation relies on imports for more than 50 per cent of its food and agricultural product needs. Devaluation would only hurt the Egyptian market, and those at the receiving end are people and businesses who would typically spend more for a lesser quantity.

Hence, a weakened Egyptian pound makes the nation’s exports more competitive in global markets and simultaneously makes imports more expensive, giving rise to inflation in the country. Businesses would be forced to bear the brunt of the economic fallouts due to the rise in production costs. Such economic trends can cause stunted growth for businesses or force them to cut down on staffing (creating more unemployment). Also, buying power would decline as people begin to search for cheaper or improvised alternatives against luxury and quantity. This would in the long run decrease living standards. Internal inflation in a country is usually trailed by a weak currency.

Negative economic trends like these put businesses and consumers in a quagmire. They also compel governments to take economic actions like borrowing, increasing interest rates or introducing a subsidy on certain essential goods. We have seen these happen across emerging economies in sub-Saharan Africa more recently.