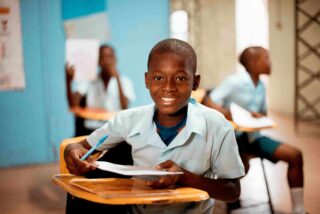 Here is what back-to-school is costing Nigerian parents

It is back-to-school season and many parents in Nigeria are not smiling. “The cost of resuming school after a long holiday is overwhelming due to inflation rates,” said Aghogho Umukoro, when I reached out for comments while preparing my draft for this article.

Umukoro, an engineer, who lives and works for the government in the oil-rich city of Port Harcourt, is a mother of two preschoolers. “Everything has increased: school fees, stationeries, uniforms. Just imagine salary earners like us whose income remains fixed amidst all these increases,” she lamented. “At least, before now, I could run noodles and eggs for my boys with N200. But that now costs me N450. I can’t even get a good biscuit for N50 like I used to. Or is it our ‘common-man-bread’? Agege bread is now for the rich.”

A popular statement among some Nigerian parents is “September is not your mate”. This statement alludes to the financial realities that trail new school sessions in Nigeria, which often commence in September. The country’s educational curriculum provides primary to secondary schools with three terms. The first term is when pupils get into a new class after they pass their promotional exams in the third term, which often ends in July. Both private and state-run schools use these schooling methods.

Most Nigerians have more faith in private schools than in public schools. But enrolling her children in a 1-star private school is becoming a luxury Umukoro may eliminate soon. “We are thinking of taking the kids to a public school. The same public schools that the government has abandoned. That way, we can stay sane and be alive for our children. The economy is overwhelming,” she added.

Our conversation lasted for close to 5 minutes. But the emotions it evoked crippled a large portion of the hope I had for Nigeria. ‘What hope is there for the young generation of people breeding across the country?,’ I thought. It would not be wise to base my argument on an individual experience. After all, Port Harcourt is an expensive place to live in. Thus, I took the liberty to find out if the story was the same for parents living in other parts of the country.

I reached out to Gloria Izore, a working-class mum who lives in Abeokuta, a city in the Southwest region of Nigeria, where the living standards are relatively cheaper compared to Port Harcourt. Her responses were similar to Umukoro’s. “Going back to school for children is expensive because this is the first term for schools. The cost of school fees, books and other learning materials have increased,” Izore said.

For many working-class mums in Nigeria, whose children start preschool as early as 10 to 12 months of age, the content of their lunch boxes is a planned investment. They prioritise the quality and quantity of food and snacks in their children’s lunch boxes. Sometimes, schools recommend food, drinks and snacks for their pupils. But inflation is biting hard.

“The cost of preparing my daughter for school every day has surprisingly doubled. Last term, I could buy a carton of small biscuits for N800 and a carton of the big ones for N1500 but the cost of each carton has doubled. Even the juice pack I bought last term for N1850 now goes for N3500 per pack. One funny thing I noticed with the increase is that the quality and quantity of some of these items have dropped. Invariably, we are paying more for less, ” she said.

While many parents work hard to meet the shocking demands of the new school term, some are innovating alongside a stifling economy. “Most days I keep some leftovers of our evening meals for my children to take to school the next day,” said Beatrice Abiodun, a Human Resource practitioner who lives in the bustling city of Lagos. “Since the prices of things keep going up, I have resorted to buying snacks piece by piece for my children, no more bulk purchases” she added.

As the world battles soaring prices amid speculations of a global recession by 2023, Nigeria’s inflation reached 19.64 per cent in July, the highest in 17 years since September 2005. As more unexpected occurrences like wars and disease outbreaks threaten the global economy, people continue to innovate to meet the peculiar demands of their economies.