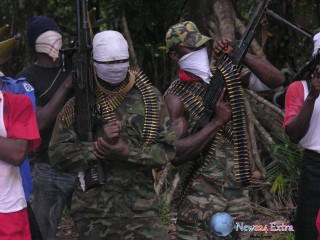 This morning, the Niger Delta Avengers (NDA) group took to its Twitter page to announce that it has blown another pipeline in Akwa Ibom State. The pipeline in question belongs to the Nigerian National Petroleum Corporation (NNPC). This comes barely three days after the militant group conditionally accepted the offer to conduct peace talks with the Federal Government of Nigeria.

At 4:00am @NDAvengers  blow up NNPC Pipeline in Oruk Anam Local Government Area in Akwa Ibom.

This latest incident brings the number of attacks confirmed by the group to 14. Below is a timeline of their attacks so far:

Saturday, February 13, 2016 – On this day, the NDA blew up a major export line being operated by the Shell Petroleum Development Company of Nigeria (SPDC).

Friday, February 19, 2016 – Avengers Strike Team 6 – one of the numerous strike teams of the Niger Delta Avengers around the region – blew up the Clough Creek Tebidaba Agip Pipeline Manifold in Bayelsa State.

Wednesday, May 4, 2016 – At about 10:40pm, the Niger Delta Avengers said it had blown up the Chevron valve platform. The Avengers claimed the platform is the most significant platform for Chevron because it is the main connecting point linking other platforms and it is also a fulcrum to Chevron’s Blow Out Preventer (BOP) and the Chevron tank farm.

Thursday, May 5, 2016 – The Avengers group wrote on its website that the group’s Strike Team 4 hit the Nigerian National Petroleum Corporation (NNPC) crude and gas lines.

Thursday, May 5, 2016 – Strike Team 7 of the Niger Delta Avengers blew up Well D25 in Abiteye belonging to Chevron.

Wednesday, May 25, 2016 – “We Warned #Chevron but they didn’t Listen. @NDAvengers just blew up the Escravos tank farm Main Electricity Feed PipeLine” the NDA group posted on its page.

Thursday, May 26, 2016 – On this day at 11:45pm, the NDA group blew up another #NNPC Gas and Crude trunkline close to Warri despite the presence of the Military guarding the facility.

Thursday, June 2, 2016 – “At about 2:00am today @NDAvengers blew up the Ogboinbiri to Tebidaba and Clough Creek to Tebidaba Crude Oil pipelines in Bayelsa State” the Avengers claimed on its Twitter page.

Thursday, June 2, 2016 – The Avengers blew up the SPDC forcados 48″ Export line. The reason given by the Avengers for the attack was that they warned SPDC not to go ahead with repair works but they refused.