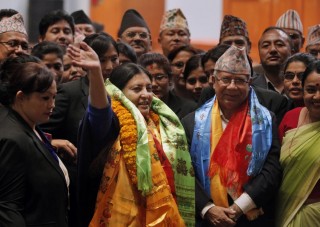 On Wednesday, the 28th of October, the parliament of the Asian nation of Nepal elected a woman as its President. Ms. Bidhya Devi Bhandara became the first female President of Nepal, at the age of 54. She is currently the Vice-Chair of the ruling party – Communist party of Nepal (United Marxist Leninist). Ms Devi was formerly Defence Minister of Nepal from 2009 to 2011.

Though her role as president is somewhat of a power sharing partnership as Nepal also has a prime minister, she is however still the commander of her country’s armed forces.  As a strong agitator for women’s right in Nepal, she was one of the voices that called for women’s inclusion when a new constitution was to be drafted. Now, an article in the new constitution mandates that either the president or the vice-president must be a woman.

There are several other women like her around the world, currently serving as presidents of their countries.

She is the current and first female elected president in Liberia. She also became the first female president in Africa when she won in the 2005 presidential elections in her country. The 77 year old was re-elected in 2011, and also won a Nobel peace prize that same year.

Ms. Michelle Bachelet became the first female president of Chile when she won the polls in 2006 with 53.5% of the votes. After leaving office in 2010, she became the Executive Director of the United Nations Entity for Gender Equality and the Empowerment of Women (UN Women). She left the UN in 2013 to contest the presidential elections, winning with 62% of the vote. She also set a record as the first person to be elected twice as, President of Chile.

Dilma Rouseff became the first female president of Brazil in 2010, winning via a run-off election. She was a former guerilla fighter, fighting the military dictatorship until she was caught in 1970 at the age of 23, and jailed for two years. She is currently serving her second term in office after gaining a narrow victory in 2014.

Fakim became the first female elected president of Mauritius after she was elected into office in May 2015. A biodiversity scientist by profession, she has won many international awards both for her contributions to science and leadership in Africa and the world.