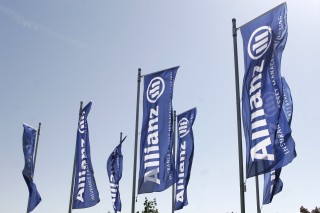 Recently, Allianz Global Corporate Specialty (AGCS) released the 7th annual Allianz Risk Barometer analyzing corporate risks globally. It also analyzes risks by region, country, industry, and size of business. According to the report companies operating in Nigeria are increasingly worried about theft, fraud, corruption, market developments as well as changes in legislation & regulation. Other growing concerns in the country are fire, explosion and power blackouts. The report is based on a survey conducted 1,911 risk experts from 80 countries.

“For the first time, business interruption and cyber risk are neck-and-neck in the Allianz Risk Barometer and these risks are increasingly interlinked. Whether resulting from attacks such as WannaCry, or more frequently, system failures, cyber incidents are now a major cause of business interruption for today’s networked companies whose primary assets are often data, service platforms or their groups of customers and suppliers. However, last year’s severe natural disasters remind us that the impact of perennial perils shouldn’t be underestimated either. Risk managers face a highly complex and volatile environment of both traditional business risks and new technology challenges in future,” said Chris Fischer Hirs, Chief Executive Officer, AGCS.

According to the report, studies show that corruption is a significant obstacle to business in Nigeria. Companies are very likely to encounter bribery and other corrupt practices. Corruption also features as a top 10 risk in West African countries, Togo and Ivory Coast, which participated in the survey for the first time. To provide financial protection for managers against the consequences of actual or alleged “wrongful acts” when acting in the scope of their managerial duties, companies may consider taking up Director & Officers (D&O) insurance. The D&O policy will pay for defence costs and financial losses. In addition, extensions to many D&O policies also cover costs for managers generated by administrative and criminal proceedings or in the course of investigations by regulators or criminal prosecutors.

The market and economic conditions are improving. “Recently, Nigeria resolved a six-quarter recession and an exchange rate crisis. A better business environment, as well as the recovery of oil prices, should help accelerate growth in 2018 to over 2.5% from 0.8% in 2017. However, the inflation persistence to around 12.9% in 2018 may well trigger another depreciation pressure on the Naira,” says Stéphane Colliac, Senior Economist from AGCS sister company, Euler Hermes.

Businesses’ perception of the threat posed by political risks and violence remains relatively unchanged year-on-year. However, respondents are more worried about terrorism. Businesses do not have to be the direct victim to feel the effects. If an attack occurs nearby, the surrounding area may be closed, impacting operations. Globally, a general trend of increased political activism can be anticipated, causing further disruption.

Business interruption (BI) can have a tremendous effect on a company’s revenues. Yet its impact is one of the hardest risks to measure. “No business is too small to be impacted,” says AGCS Africa CEO, Thusang Mahlangu, “A severe interruption can even have a terminal impact, particularly for smaller companies. But as many businesses transition from being rich in physical assets to derive more value from intangibles and services, increasingly, BI is being triggered by non-traditional risk exposures which don’t cause physical damage but result in lost income – so-called nondamaged business interruption (NDBI),” Thusang Mahlangu said further.

Fire, explosion, which is a major source of BI, is a serious concern for Nigerian businesses, especially considering the many incidents that occurred in 2017. As one of the world’s largest oil and gas producers, the country is highly susceptible to accidental fires that may interrupt power supplies. It is a known fact that power blackouts are prominent in the region. In fact, in a recent outage across the country, the ministry of power blamed it on a fire at a gas pipeline system that interrupted gas supply and affected the national transmission grid. Local businesses should ensure they have a sufficient backup or risk management plan for the production halt.

Cyber incidents through events such as WannaCry and Petya ransomware attacks brought significant financial losses to a large number of businesses. Cyber threats also vary according to company size or industry. “Small companies are likely to be crippled if hit with a ransomware attack, while larger firms are targets of a greater range of threats, such as the DDoS attacks which can overwhelm systems,” says AGCS Cyber Insurance Expert Nobuhle Nkosi.

New technologies rank as the second top risk for the long-term future after cyber incidents globally, with which it is closely interlinked. The vulnerability of automated or even autonomous or self-learning machines to failure or malicious cyber acts, such as extortion or espionage, will increase in future and could have a significant impact if critical infrastructure such as IT networks or power supply are involved.

“Although there may be fewer smaller losses due to automation and monitoring minimizing the human error factor, this may be replaced by the potential for large-scale losses, once an incident happens,” explains Michael Bruch, Head of Emerging Trends, AGCS. “Businesses also have to prepare for new risks and liabilities as responsibilities shift from human to machine, and therefore to the manufacturer or software supplier. Assignment and coverage of liability will become much more challenging in future.”

Infographic from the 2018 Allianz Risk Barometer 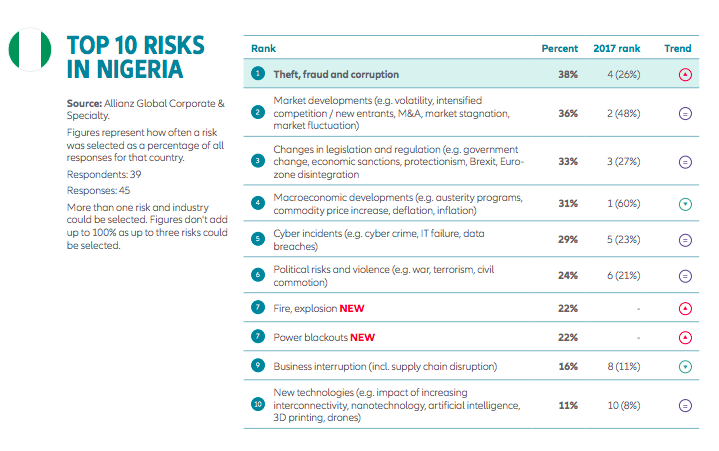 This video highlights the most important cyber risk challenges businesses will face in 2018, as identified by the ‘Allianz Risk Barometer 2018.