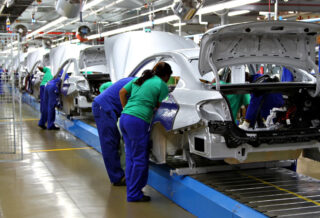 Industrialization is one of the most salient ingredients for economic development. Most countries we tag as “advanced” or “developed” have those labels because of how industrial they are. And when you consider that industrialized nations have less than 20% of the world’s population but produce more than 70% of global output, you’ll understand why the rest of the world calls them “world powers” or “great powers.”

Africa has always had the potential to expand its industrial capacity to exponential degrees. However, growth has been slow on the continent. The continent is at the bottom of the global value chain, with its share of global manufacturing at around only 1.5 per cent. Also, about 80% of the products Africa manufactures stay in the continent, either being consumed locally or traded at intra-African markets. So even though it has the world’s youngest population and a bounty of natural resources, its members are still, at their best, developing nations.

Yet, it’s worth noting that some notable progress has happened across the continent in the last decade.

Namibia had the tenth-highest country score on the Africa Industrialization Index. In 2021, its industry sector contributed 25 per cent to its GDP, nearly three times as much as agriculture (9.4%). It’s also the country’s third-highest employer of labour. According to the report, Namibia is one of the few African countries with advanced manufacturing sectors.

Kenya’s manufacturing output has been on a steady rise for over two decades. In 2021, it reached an all-time high of $7.99 billion. The country is one of Africa’s leading exporters of horticulture and tea and is at the front seat of the continent’s digital revolution. And while Kenya’s agricultural sector is larger than the industrial, it has shown a lot of promise on the processing front: food and beverages currently dominate the manufacturing sector. The fruit, vegetable, and cut flower sectors employ an estimated 200,000 people and generate over $1 billion in annual export revenue. The report also states that Kenya is one of the countries that has improved its business climate over the last decade.

Nigeria is one of the only two West African countries among the top ten. According to the report, it’s also one of the few countries to have shown overall industrial improvements. Like Kenya, food and beverages dominate Nigeria’s manufacturing sector. Another one of Nigeria’s highlights is how the government uses tariff policy to encourage the revival of the country’s automotive industry. It raised tariffs on fully assembled vehicles and lowered them on vehicle parts. According to the World Bank, Nigeria’s manufacturing output reached an all-time high of $64.4 billion in 2021. However, it’s notable that Nigeria’s industrial sector has been on a sharp decline this year, as it reached its lowest value in seven years.

Senegal and Nigeria are the only West African countries among the top ten. Senegal’s industrial sector is larger than its agricultural sector, employing 13.6% of the country’s labour force. It’s also one of the few countries showing significant industrial improvement, as it now employs more people than ever before.

Senegal’s economy has been expanding in the last two decades. So even though manufacturing output has reached an all-time high of $4.08 billion, the country’s reliance on the sector has dropped to a record low, according to data from the World Bank.

Mauritius is one of Africa’s fastest-growing economies. One of the highlights of the country’s growth is how it collaborates with the private sector to identify and support infant industries, based on ‘educated guesses’ about their growth potential. Mauritius helped to promote the uptake of new technology and improve quality standards in its textile industry.

An interesting fact is that Mauritius has been reducing its dependency on manufacturing, despite its industrial growth. As of 2000, manufacturing made up more than 21% of its GDP. But that proportion has now halved to 10.7%.

Tunisia has dropped from the number two spot to fourth. But its industrial growth has been relatively strong compared to its African peers. Tunisia’s industrial sector is more than two times the size of agriculture. Over 1000 companies operate in the sector, 435 of which are fully exporting, with an average annual growth above 13%.

Tunisia’s top exports include electrical machinery, clothing and fashion accessories. It is also one of Africa’s largest exporters of insulated wire.

The industrial sector’s value grew from $22 billion in 2014 to $60 billion in 2021. It’s also touted as one of the countries that can lead Africa into an industrialized future.

Morocco scores 0.8387 on the industrialization index, ranking it second in Africa. Since 2010, Morocco’s manufacturing economy has steadily improved across all the Index’s categories, making it one of the strongest in Africa.

Industrial growth has been given top priority by the government, especially in the automotive industry. Morocco exports women’s clothing, automobiles, fertilizers, and electrical distribution equipment to markets across the world, particularly those in Europe, the United States, and Brazil. After South Africa, the nation is now the continent’s second-largest exporter of manufactured goods.

South Africa tops Africa’s industrialization rankings by being the only sub-Saharan country to perform better than the North African countries. With an index score of 0.8404, it is the closest African economy to the global standard.
South Africa is Africa’s largest exporter of manufactured goods and the most important trading partner for its regional neighbours. However, the country’s performance has been shrinking in the last decade, as it had a much better score in 2010 (0.8957).